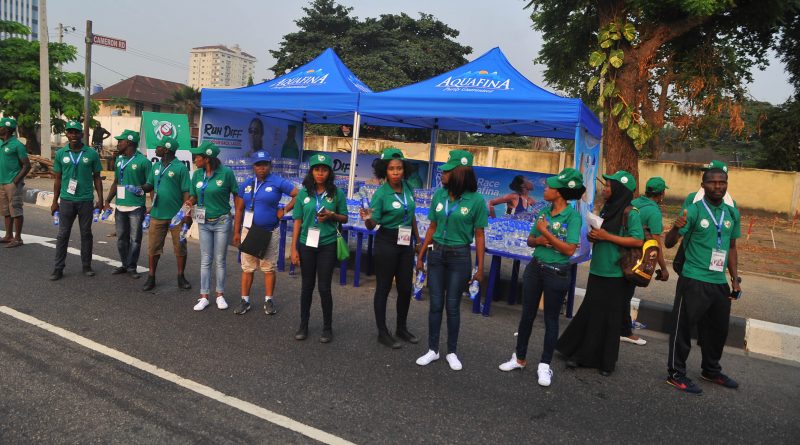 7Up and Aquafina premium table water who served as the official beverage and water respectively of the second Access Bank Lagos city Marathon provided the necessary tonic for great performance by the athletes as they took to the 42.5 km race on February 11. Right from the starting point at National Stadium in the Surulere area of Lagos to the finish line at the Eko Atlantic City in Victoria Island, there were 20 water points and 10 refreshment booths to refresh the runners. Now the company say they plan to do even more at the next of the race having surpassed the level of their participation in the 2016 edition.

Head of Marketing, Seven-Up Bottling Company Plc, Mr. Norden Thurston said 7Up and Aquafina are lifestyle brands as they give energy to the consumer, provide refreshment and inspire a youthful lifestyle.

“This is the synergy between our brands and the Lagos City Marathon as we partner with the Lagos State government to ensure that Lagosians cultivate a youthful lifestyle through physical and leisure activities like the Marathon,” he said.

Managing Director of Seven-Up Bottling Company Plc, Mr. Sunil Sawhney congratulated the winners in the male and female categories and Team 7Up for putting up an excellent performance. Mr. Sawhney said though 7Up and Aquafina premium table water were official beverage and water respectively of the Lagos City Marathon, his organisation identifies with the Lagos Mega City project hence it is partnering with the state government to realize this objective.

“All over the world big cities have one major annual marathon event: London, New York, Tokyo, Dubai to mention a few. Lagos City Marathon will project Lagos on the global map and ensure that the mega city status is achieved in a very short period,” Sawhney said.

The female category was also an all Kenya affair with Tanui Rodah, Fridah Lodepa and Alice Timbilil winning the first, second and third position respectively.

Among Nigerian runners Philibus Sharubutu and Olude Fadekemi won in the male and female categories respectively and were rewarded with N1m cash prize each.

The 10km Wheel Chair Marathon was won by Hannah Babalola and Sefiu Adewale in the female and male categories and were rewarded with N1m cash prize each.