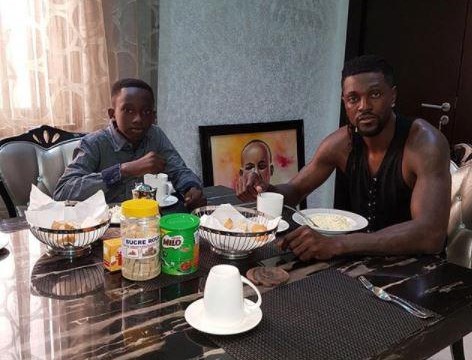 He left behind the lad, who Togo international Adebayor said he had chosen to look after in a heartfelt Instagram post. Adebayor, 33, already has a seven-year-old daughter named Kendra, according to The Sun report.

And alongside a picture of himself with Junior, he wrote, “Whoever knows me know my elder brother, Peter Adebayor who is no longer with us.

“Here is his son and today I declare him as my first son. Let me introduce you to my first son. His name is Junior Emmanuel Adebayor. Blessings.”

Adebayor last month revealed that his family repeatedly drove him to the brink of suicide. Indeed for years he has written and said so much about his disputes with members of his family.

The Istanbul Basaksehir striker said they tormented him with non-stop pleas for money while not caring about his wellbeing.

He said, “I felt like killing myself so many times. I kept this to myself for years and years.

“I am disgusted that things reached this stage, but I feel relieved to have talked about it.

“My football career will be finished in three or four years. By contrast my family name will remain with me – together with these people.

“Things are hard to bear when you are working hard to lift your family out of poverty, but they are still opposed to you.

“They rang me while I was having a scan to ask me if I could pay a kid’s school fees.

“At least ask me first how I am before you do this!”