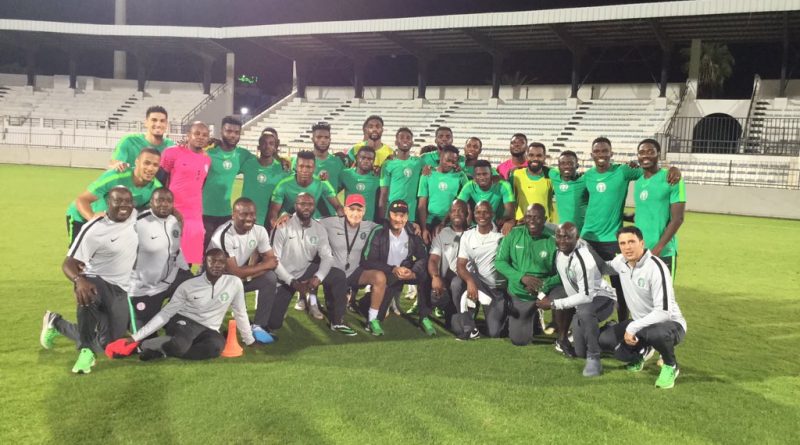 Super Eagles have perched atop the Group E of the 2019 Africa Cup of Nations qualifying series for the first time after a hard-fought 3-2 win over Libya in Sfax on Tuesday.

In the match played at the Stade Taïeb Mhiri, in Sfax Gernot Rohr’s wards controlled the proceedings. But they somewhat allowed the Libyans into the game before nailing it with minutes to go.

Having not scored in 13 months, including all pre-World Cup friendlies and at the FIFA World Cup finals in Russia, former junior international Odion Ighalo added two to the hat –trick he netted in Uyo, for a total of five in three days, effectively abbreviating the Mediterranean Knights’ chances of earning a place in Cameroon next year summer.

Nigeria took it straight to the hosts from the beginning, and after nine minutes, Alex Iwobi stole from a fumbling Sand Masaud on the right but his pull-out was cut off by defender Motasem Sabbou. Four minutes later, Nigeria went ahead after Ighalo did the simplest of tap-ins following a brilliant combination between Iwobi and team captain Ahmed Musa.

Installed in one corner of the stadium, members of the Nigeria Football Supporters Club made their presence felt with dancing, drumming and singing, and their performance appeared to match the rhythm of the Eagles’ flowing game. It was no surprise, given the extent of domination, when Ahmed Musa scored the second after beating two defenders in the box from a pass by Ighalo.

Somehow, the Eagles took their feet off the pedal, allowing the Knights into the game, and it took an alert Etebo to heave the ball away as Mohamed Zubya cocked the trigger from a goalmouth melee. Five minutes later, the Libyans again came close when goalkeeper Francis Uzoho uncharacteristically punched the ball instead of cuddling it.

In the 25th minute, Nigeria could have been 3-0 up but Ighalo’s pass to Iwobi from a quick counter was well-read by Mohamed Abdussalam. Nine minutes later, Libya got a lifeline as Mohamed Zubya nodded into the net from a flicked header off a free kick.

In the second period, the Eagles re-integrated and once more, bossed proceedings. But Iwobi wasted too much time from a counter and lost the ball in the 50th minute, before Zubya’s shot was blocked and Uzoho parried Ahmed Ben Ali’s shot over the bar.

Iwobi flashed a shot away in the 67th minute and Aina was alert to divert a ball meant for Ben Ali five minutes later, but a minute later, Libya were level as the irrepressible Ben Ali shot past Uzoho from close range as the Eagles’ defence was caught napping.

Nigeria would have the last word, as Ighalo, from a teasing lob by substitute John Ogu that was headed down by Musa, drove past the Libyan defence and blasted past goalkeeper Ahmed Azzaqeh.

Victory took Nigeria to nine points after four matches, one above South Africa’s Bafana Bafana who drew 0-0 with Seychelles in Mahe Island earlier in the day. Libya have four points while Seychelles have only one.

Leader of delegation, Seyi Akinwunm, told thenff.com: “This is a very sweet victory. I am happy with the performance and the three points. Going top of the group for the first time in the campaign is a delight, and we intend to remain there.”

Next up for the Super Eagles is a potentially-explosive duel with Bafana Bafana in a top-of-the-table clash at Johannesburg’s Soccer City on 17th November.