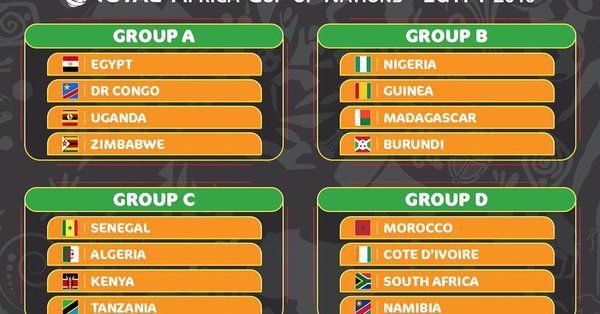 Nigeria will battle the Syli Nationale of Guinea, Intamba Mu Rugamba of Burundi and Madagascar, the first team to qualify for the finals, in the group phase of the 2019 Africa Cup of Nations. The four teams are in Group B.

At the draw ceremony conducted against the background of the Giza Pyramids in Cairo on Friday evening, all the teams qualified for the biggest Africa Cup of Nations finals in history (24 in all) were drawn into six groups of four teams each.

Of the Super Eagles’ three opponents in the group stage, Madagascar and Burundi are debutants, while Guinea, who picked silver ahead of Nigeria at the league-format 1976 AFCON in Ethiopia, are making their 12th appearance. The Nigerians are going for their 18th appearance.

Hosts Egypt, also with the most wins (7) must negotiate a tricky Group A against two –time winners DR Congo, Uganda and Zimbabwe, while Senegal head Group C that also has 1990 champions Algeria, Kenya and Tanzania.

Super Eagles’ Technical Adviser, Gernot Rohr, who saw the draw live behind the Giza Pyramids just as the other 23 lead coaches, said: “It is a tough group and we have to be at our best and our fittest. Guinea has a young, tough team and we will have to be at our best against them. Burundi eliminated Gabon even with their Pierre Aubameyang. Madagascar was the first team to qualify. It would be a great showpiece of football but it is important for our players to avoid injuries as the season heads towards the end.”

On his part, Super Eagles’ captain Ahmed Musa said: “I think it is a tough group for the Super Eagles. It is important for us to stay fit and avoid injuries so that everyone would be in great shape in Egypt. We have a young team who have played at the World Cup but have not played at the AFCON. For me, we are ready for any country in Egypt. It would be an interesting experience.”

The two top-placed teams in each group, as well as the best four third-placed teams, will qualify for the knock-out rounds.