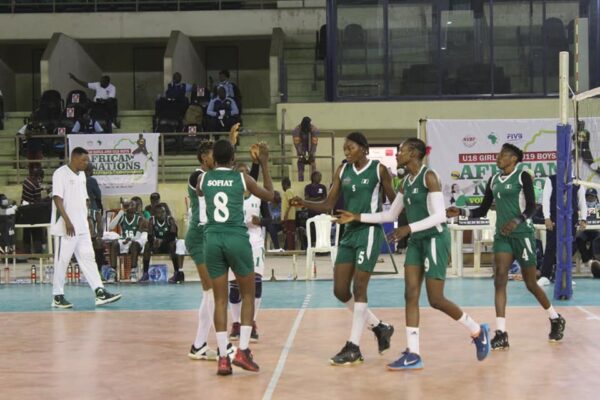 Nigeria are on the verge of qualifying for the U19 FIVB World Championship in Iran after winning their second game in the ongoing U19 Boys African Nations Volleyball Championship in Abuja.

Team Nigeria started the first set on a bright note as the duo of Michael Abari and Oyedepo Oyewale dismantled the backline of the Gambian team. Killer spikes from Pascal Ozokoye gave Nigeria vital points to win the the opening round 25-20.

Gambia reorganized their strategies in the second set and put up stunning monster blocks which gave them vital points as they claim the second round by 25-23 point.

The presence of the home crowd inspired the Nigerian side to a roaring comeback as they fought back strongly to pick up in the dying minutes of the third set to secure 25-20 point.

The hosts never looked back as they produced a spectacular performance in the fourth set, winning by 25-19 points to send the cheering crowd into a noisy celebration.

Commenting on the victory, assistant coach of Team Nigeria U19 Boys, Adekalu Adeniyi attributed their victory to the huge backing of the fans against Gambia.

Adeniyi further hailed the players for their team spirit and determination put on display, stressing that anything short of a win would have been a disaster.

“I want to thank everyone that came out to support team Nigeria; their support really meant a lot to the team. When the boys were playing, the fans were cheering us to victory and I cannot thank them enough,” he said.

“The Gambia boys are good but we were better than them. We capitalized on the lapses of the team and sealed our victory in the 3rd set. If we had lost the 4th set, it would have been disastrous.”

After a back-to-back win, Adeniyi will be eager to see his Nigeria compete at the U19 World Championship for the second time in a row.