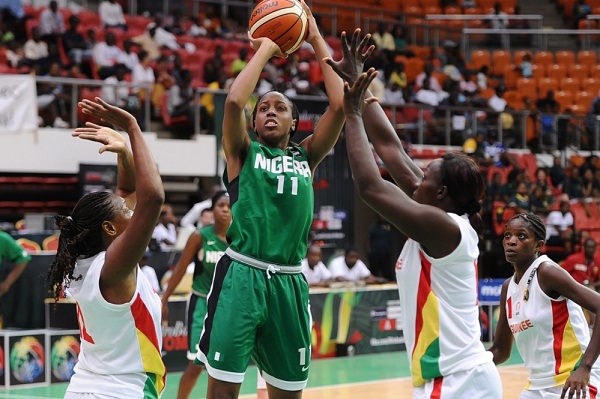 Pius Ayinor
Nigeria ladies on Saturday drilled Congo 84-47 at the ongoing AfroBasket championship holding in Bamako, Mali. The win has given Nigeria two straight games after their opening day over Mozambique, Extrasportsnigeria.com reports.
On Saturday the Nigerian ladies led from the tip off to the buzzer. They won the first quarter 23-8 but lost the second quarter 22-18. But that was the closest the Congolese could get. D’Tigress won the very low scoring third quarter 11-8 but then overwhelmed their opponents 32-9 leading to the buzzer.
Nigeria’s Atonye Nyingiya led the scoring with 13 points while Congo’s Mokango Modiri shot 10 points.
Nigeria will continue their trophy chase Sunday morning with the match against the Egyptians. Egypt defeated Guinea 109-78 in the highest scoring game of the day. It is certainly going to be a real battle between Nigeria and Egypt for the match billed to start at 10.30am local time. Mozambique and Guinea will play the other Group B game.
Cameroon which finished as runners up two year narrowly lost to Ivory Coast at 57-54 in a Group A match while Angola defeated hosts Mali 68-59 in another Group A match played also in Bamako on Saturday.