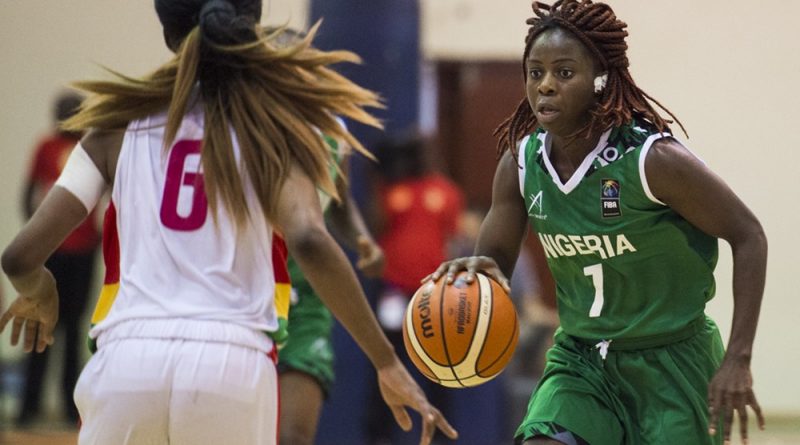 Dallas Wing forward Evelyn Akhator was again in top shape as Nigeria consolidated their hold of Group B at the FIBA Afrobasket Women’s competition pounding Guinea 106-33 on Tuesday, Extrasportsnigeria.com reports.
Akhator who made double-double against Egypt on Sunday again recorded a double-double as she shot the team to victory and replicated the same 24 points scored in the team’s last game. She then added 7 rebounds, 3 assists and 4 steals against the Guineans, to ensure her team retained their lead all through the game as they coasted to another comfortable win.
Ogoke Sarah who was at the heart of the team’s offensive transition scored 13points and had 2 assists with home girl, Akashili Nkechi having 2 assists and scoring 12points against the rattled Guineans. Elonu Adaora recorded 11 points, 2 steals and 2 rebounds.
And for the third time in the competition, all the registered 12 players recorded their names on the score sheet with Atletico Lanus (Argentina) player Nwaigwe Ugochi, the lowest, weighing in with 4 points.
D’Tigress have now switched their focus on their last group game against defending champions Senegal with the match fixed for Wednesday at the Palais Des Sports Salamatou Maiga, Bamako. The match against Senegal will certainly be one of the major highlights of the competition.
On the game Nyingifa Jennifer who plays for Elitzur Holon of Israel, said the team must play one of their best games if they are to stand the chance of outscoring the Senegalese who are desperate to defend their title.
“We are going to have to come in really focused, limit our turnovers, mistakes and really be on the same page offensively and defensively.”
She acknowledged that playing against the taller players means D’Tigress “must really have to box them out and crash the board.”
With a rare start against the Guineans on Tuesday, Nyingifa said she would continue to play her role whether as a first 5 starter or a player who will come in from the bench.
Nwaigwe Ugo who is representing Nigeria for the first time predicted that the game against Senegal is definitely going to be a great game.
“It’s going to be hard, we are going to have to fight and it’s going to be a lot of back and forth but we are going to come out on top.”