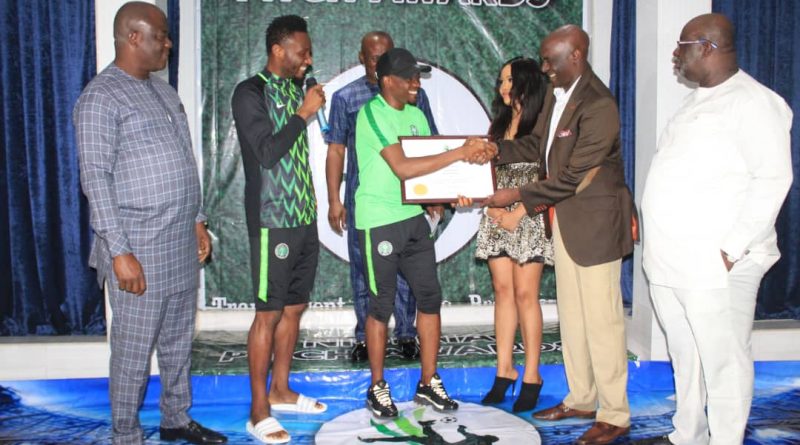 The award ceremony which held after the friendly between Nigeria and the Warriors of Zimbabwe was attended by Seyi Akinwunmi First Vice President of the Nigeria Football Federation, Ahmed Fresh, NFF Board member, Chiedu Ebie, Secretary to the Delta State Government, Coach Gernot Rohr, Olayinka Adeleke, State Police Commissioner and members of the Super Eagles.

Speaking at the ceremony, Akinwuni who represented the NFF President commended the organizers of the awards stressing that putting an award together required a lot of effort. He reiterated the support of the Federation for the Pitch Awards.

Shina Philips, President of the Nigeria Pitch Awards expressed appreciation of the organizers to the Federation and the Delta State Government. He said the organizers remained committed to giving Nigerians transparent and credible awards.

“We will continue to do what is right because we believe our players need to be motivated by a transparent and credible reward system which will see then earn the respect of everyone in the football community,” Philips said.

In the Defender of the Year category, William Troost-Ekong of Udinese starved off competition from fellow team mates Leon Balogun and Kenneth Omeruo. In the Goalkeeper’s category, Anorthosis Famagusta goalkeeper, Francis Uzoho beat last year’s winner, Ikechukwu Ezenwa and Enyimba goalie Theophilus Afelokhai to win the prize for the first time. Leicester City midfielder, Wilfred Ndidi retained the Midfielder of the Year award and Odion Ighalo the Shanghai Shenhua forward was voted the Striker of the Year.

The Sam Okwaraji Award for commitment to Nigeria Football has been one of the high points of previous Awards Ceremonies. Akinwunmi, the First Vice President of the NFF and Chairman Lagos FA has joined Amaju Pinnick and Dr. Ifeanyi Ubah as winners of the prestigious Sam Okwaraji Award. The NFF President had won the previous two editions. Oil giants, Aiteo Group retained the Corporate Sponsor of Football award. Enugu Rangers Coach, Gbenga Ogunbote won the Coach of the Year award while his team carted home the Club of the Year award. Nigeria’s national women team, Super Falcons were voted the Best National Team.

Defender of the Year – William Troost-Ekong

Midfielder of the Year – Wilfred Ndidi

Striker of the Year – Odion Ighalo

MVP in the NWFL – Rasheedat Ajibade

Queen of the Pitch – Francisca Ordega

King of the Pitch – Ahmed Musa

Coach of the Year – Gbenga Ogunbote

Club of the Year – Enugu Rangers

Referee of the Year – Adebimpe Quadri