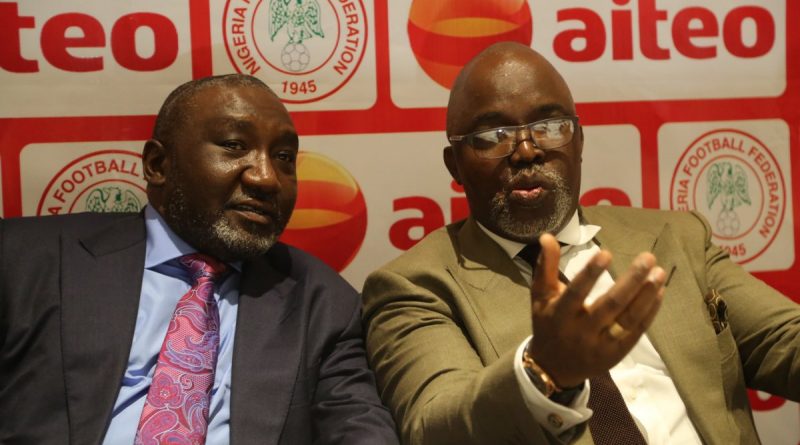 Oil company Aiteo has dismissed stories suggesting they are unhappy with the Nigeria Football Federation over the latter’s handling of the Aiteo. There were reports in few Nigerians on Tuesday to that effect but the management of the firm quickly reacted stating the story had not emanated for them,
The statement signed by the Senior Manger, Corporate Communications Ndiana Abasi Matthew reads, “Aiteo wishes to inform the general public that it remains committed to its sponsorship deal with the Nigerian Football Federation (NFF) effective, May 1, 2017.
“We wish to state emphatically that contrary to media reports, there is no ongoing review of this agreement. The multi-billion sponsorship deal, was a management decision meticulously taken upon due consideration of its benefits to the development of football in Nigeria, tremendous social capital and unifying effect on every stratum of Nigeria endeavour.
“The deal is effective for five years and we have no plans to renege on our decision. We hereby assure our valued stakeholders and Nigerian public that all aspects of the NFF pact, which includes paying Nigeria national team coaches will continue to run without hitches for the agreed five-year term. In line with best practice, we will review annually, to bring even more value for both parties and our stakeholders.
“As the Official Naming Rights Sponsor of the NFF Federations Cup, now christened Aiteo Cup, Aiteo will continue its funding of the tournament – Nigeria’s longest running football tourney. Executive Vice Chairman of the group, Mr. Benedict Peters was quoted as saying, “We will continue to underwrite the costs of organising the competition from the round of 64 for the men and women’s finals, provide solidarity support for the State Football Associations, expenses and indemnities of match officials, support for clubs, media, branding/activation as well as prize money to winners. This is at the heart of our group’s social capital investment vision of bequeathing a virile and excellent soccer culture and administration to Nigerians, which besides being Africa’s best, creates economic opportunities and wealth for generations of Nigerians”
“The NFF has recorded significant improvements in its management and execution of its national team objectives within the short term of our relationship. We look forward to an Aiteo powered football administration that would make positive history with its national teams.
“Aiteo’s relationship with NFF is unfettered in any way, and the organisation will continue to ensure that NFF gets the required financial support it needs to perform optimally. We will ensure that all stakeholders are kept abreast of any development in this regard.