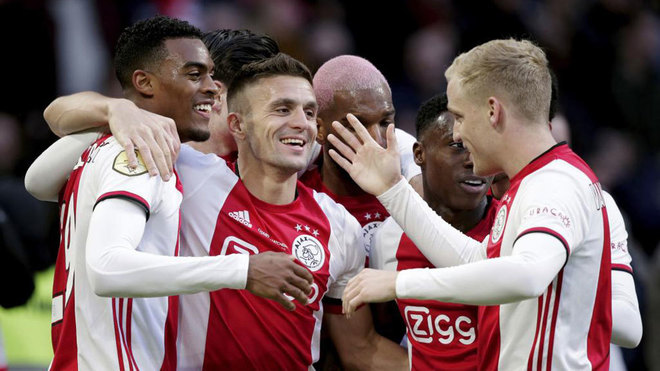 AJAX recorded the biggest win in Eredivisie history on Saturday by thrashing VVV-Venlo 13-0.

Nineteen-year-old Lassina Traore scored five goals as the reigning Dutch champions bounced back from Wednesday’s Champions League defeat to Liverpool to go top of the table, The Sun reports.

Ajax travelled to 10th-placed VVV one point behind PSV Eindhoven in first and heavy favourites to leapfrog their rivals and reclaim top spot.

But no one could have predicted the extent to which Ajax would dismantle their opponents.

Midfielder Jurgen Ekkelenkamp poked home in the six-yard box to open the scoring after 12 minutes.

Traore headed in his first five minutes later to double Ajax’s lead and tapped in his second just after the half-hour mark.

Former Southampton star Dusan Tadic slotted home just before half-time to give Erik ten Hag’s side a comfortable lead at the break.

Things went from bad to worse for VVV in the second half as Christian Kum was sent off for a high foot in the 52nd minute.

With VVV down to ten men, Ajax proceeded to run riot with four goals in the next five minutes.

Traore secured the match ball with his hat-trick goal in the 54th minute then set up Brazilian Antony to make it six a minute later.

Ekkelenkamp grabbed his second with a header in the 57th minute before Daley Blind took the away side’s tally to eight.

Traore netted his fourth of the match 10 minutes later and Klaas-Jan Huntelaar helped himself to a double after coming on as a substitute.

Lisandro Martinez scored the 12th with 12 minutes to go and there was time for Traore to add his fifth in the closing stages.

Despite the scoreline, VVV may feel they got off lightly, as Ajax registered 45 shots in the match – 23 of which were on target.

The scoreline marked the biggest winning margin in Dutch top flight history, surpassing Ajax’s own 12-1 win over Vitesse in May 1972.

However, the result was not quite good enough to top Ajax’s club record victory, a 14-0 thumping of Luxembourg outfit Red Boys Differdange in the 1984-85 UEFA Cup.