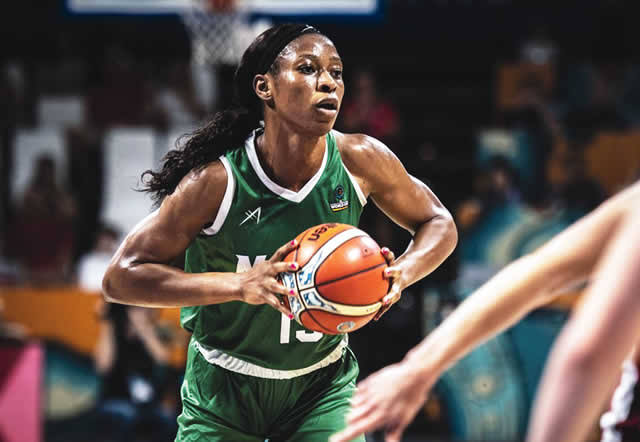 The last three years have been nothing but triumphant and prosperous for Nigeria winning back-to-back FIBA Women’s AfroBasket titles, competing at the FIBA Women’s Basketball World Cup 2018 and qualifying for the Tokyo 2020 Olympics.

It has been a show of talent, mental toughness and ultimately power so strong that they remain unbeaten in Africa since stepping on court against Mozambique in their Group B opener on August 18, 2017 at the continental competition in Bamako, Mali.

They went into that tournament as 42nd in the world and have since risen to 14th in a space of three years and according to power forward Evelyn Akhator, one of the team’s biggest assets and dependable players, they are aiming even higher at the upper echelons.

Speaking exclusively to FIBA.basketball, Akhator who was drafted as a number three pick by the Dallas Wings in the 2017 WNBA Draft admitted that D’Tigress are hungry for more success. They want to take on the world and beat the best teams.

After all, getting to the top means displacing the best at it.

If no one believes them then Akhator would have to direct them to this year’s battle against the reigning World and Olympic champions USA who were on the brink of a loss if not for a last quarter rally that saw them snatch victory from the hands of the Nigerians who had led for three quarters and almost cruised to what would have been a memorable win.

“Much respect to Brittney Griner because she was the only person that came through for them. She could not be stopped in that game even though we almost pulled it off but we are one step closer to our goal,” Akhator explained USA’s late 76-71 win over Nigeria.

Despite that painful loss, D’Tigress booked their slot at the Tokyo 2020 Olympics and this will be Nigeria’s second time to play at the prestigious competition.

“Who doesn’t want to go to the Olympics? Hearing the word “Olympics” was enough motivation for us to fight. We were not ready to wait another four years before earning another spot to qualify for the Olympics while the ticket was right in our faces so we had to do what we can to grab it.”

“I always believe I would get to the Olympics from the day I started playing for the national team and I am glad it all came to pass. Going to Tokyo has always been my dream considering the fact that I watch lots of Japanese movies and I am excited I will be going there next year by God’s grace.”

“I see Nigeria getting to the top and becoming a Top 10 country in basketball. Nobody would have thought we would be a Top 20 team and now we are number 14 in the world. I only pray that we all achieve that dream of being top of the best very soon.”

Winning the last two editions of the FIBA Women’s AfroBasket has not only been about adding to Nigeria’s trophy cabinet of a total of four continental trophies – far from Senegal’s record 12 titles but also about making a statement that they are here to stay and conquer.

“It is really important especially the fact that basketball is not a popular sport in Nigeria as compared to Senegal. It was really important for Nigeria to be on the map again and be known worldwide. Now, teams are scared whenever they hear Nigeria women’s basketball team,” the Lagos native stated.

For Nigeria, 2021 is going to be a very busy year but Akhator and her teammates are ready for the challenge. They will be leaving everything on court.

“I think playing and listening to my body as well as surrounding myself with positivity will keep me focused. I know the window between the Olympics and the FIBA Women’s AfroBasket is really short but it still will make us stay fully in shape mentally, physically and also locked into the plays and the team.”

As the world battles the coronavirus pandemic, things have not been the same world over especially without basketball action around the world in recent months.

“Honestly, I do miss basketball and I am glad to be returning back into doing my basketball workouts next week which I am already making arrangements for although I have just been indoors working out and trying to stay fit so I do not feel too out of shape when I start basketball workouts.”

Akhator has, however, been very busy back home in Nigeria where she is giving back to her community and inspiring young girls to play basketball while also contributing to communities by providing necessities through her foundation.

“The Benny A Foundation is a charitable non-profit foundation that comprises of community service, charity and basketball activities. This foundation is named after my mother who passed away in 2013. I abbreviated her name but the full name is Benedicta Akhator.

“The community service part of the foundation is focused on volunteering in cleaning of roads, streets, markets and constructing roads etc. The charity part is focused on helping the homeless, visiting orphanages and providing the necessities for the girl child. Females are much vulnerable to sex trafficking and it is important to make it known to the public about sex trafficking.

“Lastly, the basketball activities are focused on bringing more females into the game of basketball as well as teaching them the importance of education and sport. That is what the Benny A foundation is all about.

“I started playing basketball in 2009 and she supported me with everything even when she did not have everything but what she had was enough for me to appreciate her. She inspired me in all angles of my life. She taught me so much and still treated me like a princess. It really broke me when I lost her because she was my number one best friend.

“Parents need to allow their kids to pursue their dreams especially with their daughters. Everyone does not have the goal of becoming whatever their parents want them to be. Some girls have the passion for sport but because they are scared of their parents judging them and calling them names, that dream dies and they end up regretting it.”

For Akhator, basketball is way more than playing for 40 minutes and scoring points.

“Basketball has really taught me how to be a team player as well as accepting defeat. It has introduced me to so many people. Basketball is putting food on my table. Basketball is changing my life for the better. It has helped me in getting my Bachelors Degree and for that I am grateful,” she said.

“When all this is done, I am hoping to travel back to the US to fix some few things before I finally move back to France in September to focus on the upcoming season.”

Akhator and her teammates have one year to prepare for the showdown as they try to conquer the world at the Tokyo 2020 Olympics next summer.