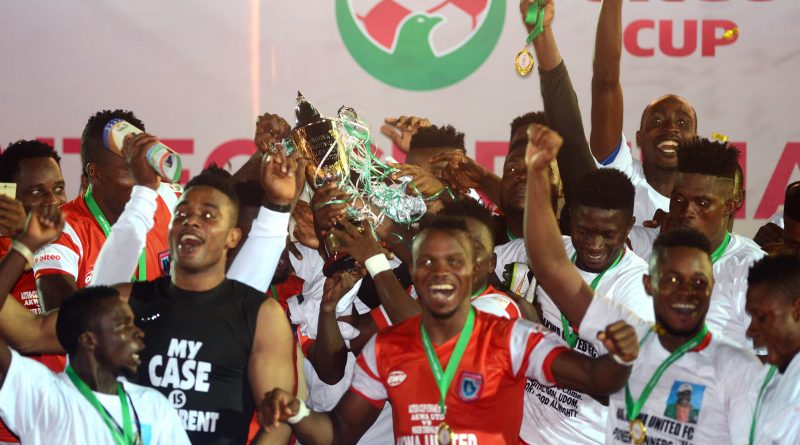 Akwa United of Uyo on Sunday won the AITEO Cup after defeating Niger Tornadoes at the Agege Stadium in Lagos, Extrasportsnigeria.com reports.

The club returned to the top having won the 2015 edition of Nigeria’s oldest and biggest domestic competition. Scoreline at the final whistle was 0-0 but the Akwa boys prevailed 3-2 after penalty shoot-out to become the first winners of the captivating AITEO trophy.

It was a very poor match in every sense as both teams failed to produce the usual flashpoints and dramatic moments that used to be the hallmarks of national competition of this nature in Nigeria.

Akwa United, whose goalkeeper Olorunleke Ojo won both the Best Goalkeeper and Most Valuable Player awards and whose Coach, Abdu Maikaba was adjudged the Best Coach, won a ticket to represent Nigeria in the 2018 CAF Confederation Cup competition.

Their very poor artistry was made up for by the colourful presentations in other areas and watched by a glittering array of eminent personalities, including Governors Akinwunmi Ambode (Lagos), Udom Emmanuel (Akwa Ibom) and Abubakar Sani Bello (Niger State), CAF President Ahmad, CAF Vice Presidents Kwesi Nyantakyi and Omari Selemani, CAF Emergency Committee members Souleman Waberi and NFF president Amaju Pinnick. There were also Executive Committee members of the NFF, chieftains of sponsors AITEO and members of the diplomatic community.