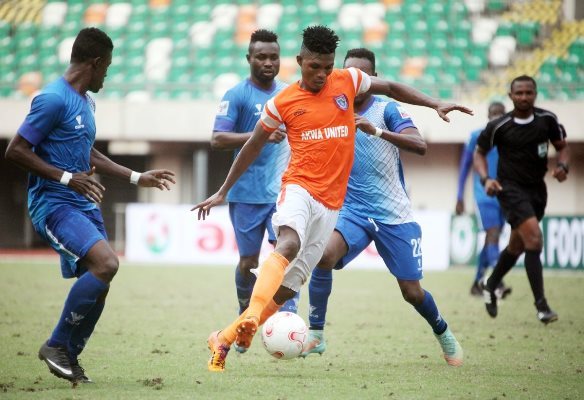 Akwa United are still the top gunners of the Nigerian professional league going into the weekend. The Uyo based team on Wednesday consolidated at the top of the Nigeria Professional Football League (NPFL) with a 1-1 draw achieved against FC IfeanyiUbah in Nnewi. The point was enough to keep them trotting on top.

Cyril Olisema put the Promise Keepers ahead as early as the 12th minutes of the game however the skipper of the host team, Patrick Ikeokwu, equalised two minutes after the return from the first half break.

Current champions Plateau United fell flat in Kano. They were handed 2-0 defeat by Kano Pillars to slip off the top of the NPFL. The defeat was Plateau’s second of the season.

Junior Lokosa hit a brace for Pillars in the 21st and 27th minutes of the first half of the game to become the leading scorer of the new season on six goals.

Plateau remain second behind Akwa on 12 points while Pillars leapfrogged both Lobi Stars and Wikki to the third spot of the NPFL log.

In the Abia Derby played at the U.J. Esuene Stadium in Calabar also on Wednesday, Enyimba defeated Abia Warriors 1-0. Winger Stanley Dimgba got the winner for the Aba Elephant. The victory was Enyimba’s second win of the season.