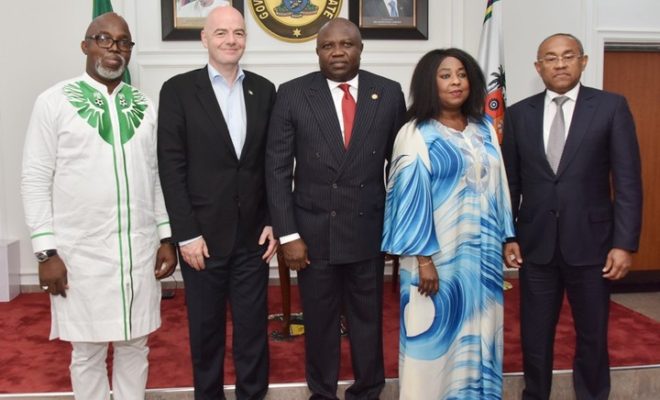 The football top guns are in Lagos for the FIFA Summit and the first Aiteo/NFF awards. The Aiteo/NFF awards ceremony was held on Monday at Eko Hotels while the Summit will hold through Tuesday at the same venue.

At the reception, Ambode told Infantino the project in Lagos would greatly boost football development in the continent.

He said, “Lagos has the potential to host the project. Nigeria is very strong in youth soccer. And if you have not decided the location for the next FIFA projects, Lagos stands to welcome all your projects. We have the population, enthusiastic and tourism potentials to receive any of your projects.”

While expressing his delight at the selection of Lagos for the FIFA Summit, Ambode said he believes the summit would boost the standard of the game in the country.

“We are delighted that Lagos is considered as the second African city to host the summit aimed at discussing football development. It is very important to us because soccer is a major sport in the state and contributes to its developments.”

Infantino said the summit would afford the body to discuss and decide new strategies to improve the game especially youth football.

He said, “We are here to discuss with CAF and NFF few projects that will help improve standard of football in the country.

“Also at the summit, we will be discussing strategies on how to improve the standard of youth and female football development. I know that Nigeria is a major force in the Africa.”