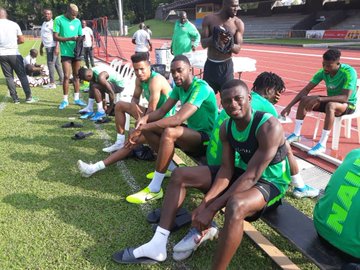 NIGERIA Coach Gernot Rohr has called up Enyimba FC defender Ifeanyi Anaemena to the Super Eagles’ camp as the three-time African champions get set to open their 2021 AFCON qualifying campaign against Benin Republic’s Squirrels in Uyo on Wednesday. The defender will also be part of the squad for the Day Two clash with Lesotho in Maseru on Sunday, 17th November.

The People’s Elephant’s bulwark has been drafted in to replace Russia-based World Cup left back Bryan Idowu, who submitted his Passport for renewal and the document is not ready for him to travel to Nigeria for the encounter.

Anaemena was impressive for the Eagles B in their 2020 African Nations Championship qualifier against Togo at the Agege Stadium last month, and has also been a key player for Enyimba, two-time CAF Champions League winners, as they reached the group phase of this year’s CAF Confederation Cup competition.

As at Monday evening, captain Ahmed Musa and 13 other players had arrived at the Eagles’ Ibom Meridien Hotel and Resorts, with the remaining nine squad members expected on Tuesday morning.

Ayodele-Aribo, who plays for Glasgow Rangers in Scotland, has scored in the Eagles’ last two games, against Ukraine (2-2) and Brazil (1-1) – incidentally the only two matches he has played for Nigeria.

The Super Eagles will train at the Godswill Akpabio Stadium on Tuesday evening.