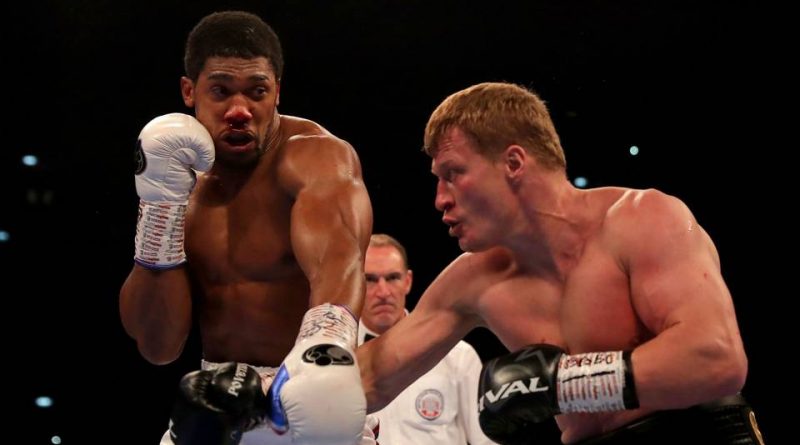 Nigeria-born world heavyweight champion Anthony Joshua survived as early shake in his title defence against Alexander Povetkin and responded like the star he is to savagely KO his Russian opponent at Wembley Stadium on Saturday.

Joshua – who retained the International Boxing Federation, World Boxing Association and World Boxing Organisation titles — was bleeding from his nose after being hit by an overhand right in the opening round, Fox Sports reports.

Joshua, 28, had admitted to feeling under “tons of pressure” as he returned to the scene of arguably his greatest triumph, an 11th-round stoppage of former champion Wladimir Klitschko last year.

And he was likely behind on the scorecards halfway through the fight as the challenger looked like shocking the world.

“Alexander Povetkin is a very tough challenger he proved that tonight,” Joshua said. “I came here to have fun, do what I have done in the gym…he was strong to the head but weak to the body.

“I got my knockout streak back,” he added. “I found my right hand again.”

But Joshua seized on the tiniest of openings in the seventh round to stun Povetkin with a straight right, before unleashing a series of furious punches to put him on the canvas.

Povetkin made it back to his feet after almost falling head-first out of the ring but it was only a matter of seconds before he was down again and the referee waved the fight over. It was the first time the Russian had been stopped in his 36-fight career.

Fury was unimpressed with Joshua’s performance Povetkin — and his declaration the Gypsy King was third in line for the next shot at the title.

“I think it’s fair to say Team Joshua and (promoter) Matchroom Boxing will never fight the Gypsy King — ever,” Fury said in an Instagram video.