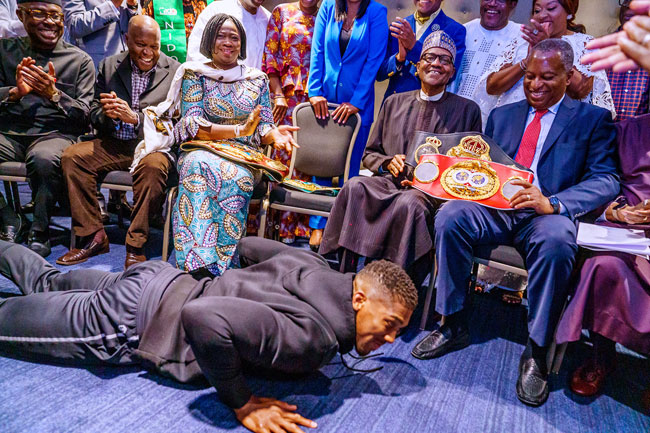 The video shared by Bashir Ahmad, who is a Personal Assistant on New Media to the President, showed the heavyweight champion prostrating before President Buhari, who is arrived in The United Kingdom for an investment summit.

The meet and greet session allowed Joshua to present his IBF, WBA, WBO, and IBO titles to Buhari.

The 30-year-old celebrated was with some other Nigerians living in the United Kingdom for the meeting.

Joshua, whose father is originally from Sagamu in Ogun State, was received by, Minister of foreign affairs, Geoffrey Onyeama; Minister of industry, trade and investment, Nìyí Adebayo; Abike Dabiri-Erewa, Chairperson of the Nigerians in Diaspora Commission (NIDCOM); and Nigeria’s High Commissioner to the UK, Justice Adesola Oguntade, among other dignitaries.

Excited Joshua could not hide his feelings as he prostrated to pay homage to President Buhari, in line with the tradition of the Yoruba.

He also enjoyed the moments by taking some selfies with the President.

Joshua met with the President just six weeks after he beat fellow boxer Andy Ruiz to reclaim his IBF, WBA and WBO titles.