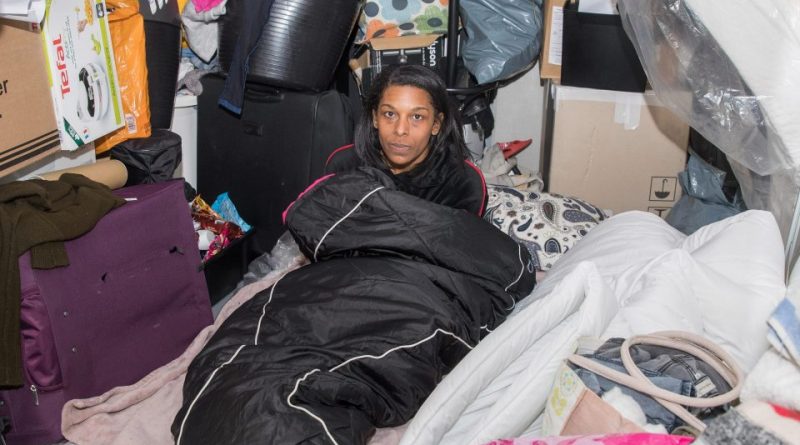 Arsenal’s problems seem to be on and off the field this time. The homeless mum of £30,000-a-week Arsenal star Ainsley Maitland-Niles is sleeping in a freezing 10ft square metal storage crate, according to The Sun report.

So while he shares a luxury £700,000 apartment with brother Cordi she has to sneak past staff at the Big Yellow Storage warehouse to sleep in the freezing container.

Jule said she began living in the box three months ago after her relationship broke down with Ainsley, 20, who is rated at £15million.

She added, “It’s a metal container with no windows or carpet. There is no toilet or washing facilities.

“My son Ainsley could buy me a flat with two weeks or two month’s wages.

“But the money’s gone to his head and I’m in this position.

“My son plays for Arsenal and I am homeless and in a storage unit.

“It’s not a home. I know what home feels like — to be able to shower, brush your teeth and sit in your room.

“All that I miss — but most of all I miss my family.

Jule said she lives in fear that warehouse staff will realise she is sleeping in the container and turn her out on the street.

She said, “I wait until everyone has gone home and slip into the unit when it is dark. It is heartbreaking.

“The area is covered in snow and it’s not been above freezing for days. I heard a homeless man died here overnight on Thursday.”

Jule sat on a bare mattress on the container’s floor and told how she struggled as a single mum to raise Ainsley and charity worker Cordi in council houses in and around Ilford, East London.

All around her are bags of family photos, including dog-eared ­pictures of Ainsley playing football as a toddler.

Pushed into a box are his first contracts with the Gunners.

Jule told how when the boys were growing up she was sometimes so poor that she went hungry so they could eat.

Ainsley was spotted by Arsenal scouts and signed for the club’s academy when he was six.

All her sacrifices appeared to have paid off when in December 2014 he made his debut for The Gunners aged 17 in the Champions League against Galatasaray.

Four days later he made his Premier League debut in a 4-1 victory over Newcastle United.

Afterwards he paid tribute to God and his mum in an interview on Arsenal’s website.

He said, “I want to thank my family and God mostly for putting me here.”

Asked what he would do with his match shirt, he said: “I think I’ll frame it and give it to my mum.”

This season Ainsley, who is a midfielder, winger or right back, has played nine league and eight European games for the Gunners.

The North London club are keen to secure the youngster, who has represented England from Under-17 to Under-21 level, on a long-term contract that could double his annual £1.5million wages.

He and Cordi, 23, currently live in a new development in upmarket Finchley, North London.

Jule’s padlocked crate is in an industrial unit just off the M25 in Hertfordshire.

When Ainsley’s career took off he initially paid the rent so he, Jule and Cordi could live in a three-bedroom home near Arsenal’s training centre in Hertfordshire.

But in March 2015 Jule had a bust-up with staff there during a meeting to discuss Ainsley’s future.

She was accused of clashing with the club’s chief negotiator Dick Law and arrested amid claims the row had turned violent. Jule was released and police took no action.

The next year Ainsley joined Ipswich on loan.

Jule was accused of leaving an X-rated message on manager Mick McCarthy’s phone after he refused to let the teenager attend an England kit launch.

She denies the claims. Soon after Jule went on an extended break to Australia, paid for by her son.

When she returned in August 2016, Ainsley picked her up from the airport.

But Jule said she noticed both her sons were being “off” with her.

She claims that days later she woke to find they had moved out of the home with their belongings. Jule raced to Arsenal’s training ground and waited for Ainsley.

He gave her a lift back to the house but as they parted he said, “I just want to live my life.”

Jule is convinced he had been advised to distance himself from her.

The mum was given six months to find a new home — and when she could not she was kicked out.

She said, “I couldn’t believe it. I was devastated.”

As she grew up in care she has no family to turn to other than her sons.

Jule said, “I had to leave the family home because it was beyond what I could afford. Ainsley refused to be a guarantor for me.”

She lived for a while out of the back of a van and slept on sofas in friends’ homes.

But in December she moved into the container, which she had already paid rent on in advance. She spent Christmas Day there alone, getting lunch at a nearby homeless centre. Now she spends her days sitting in coffee shops or the local library to stay warm.

Jule said she sent pictures of her living at the Big Yellow unit to both her sons.

He offered her £1,200 but after that she heard nothing.

Jule said that since the rift Ainsley has occasionally sent her money, giving hundreds of pounds each time.

But she added: “I believe there are very dark forces operating within football.

“They want to see me down, because the longer Ainsley is away from me the less of a positive influence I can exert over him.”