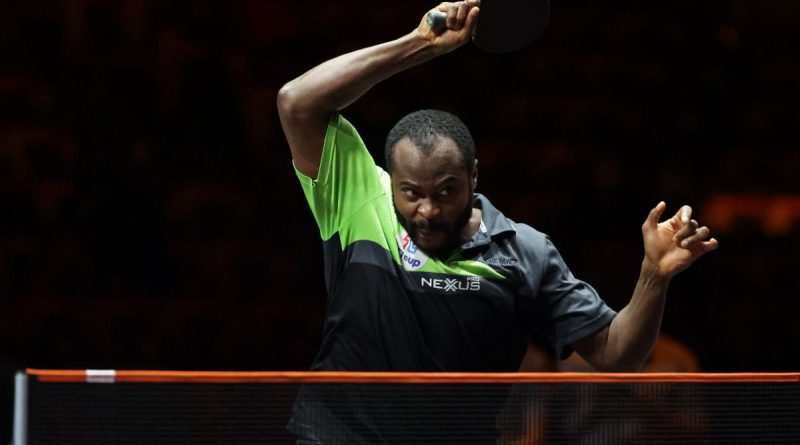 It was victory for Quadri Aruna at the first hurdle of the World Table Tennis (WTT) Cup Finals in Singapore, by recording a record 3-1 (7-11, 11-1, 14-12, 11-5) win over world No.8 Liang Jingkun of China in the round of 16 of the Men’s Singles to advance to the quarter finals of the competition.

Going into the match, the highest ranked African player trailed Jingkun 0-2 on head to head from losses to the Chinese at the 2018 Korean Open and the World Team Cup in 2019 but Aruna successfully got his pound of flesh early on Sunday morning.

“I kept fighting and I did not give up. I tried my best and it worked out for me in the end. I also think it’s my positive mindset that made me do well too.” said Aruna.

“I’m very happy and excited, I think I’m just so lucky in this match, everyone is so tired from the championships in Houston and I can see he is tired also. I kept my cool, and it actually worked for me. I put several balls to the table and he made a lot of errors,” he added.

Unlike his Chinese opponent who had the technical support of his coach, Aruna didn’t have anyone in his corner to render such support at intervals, but that didn’t deter his mindset as he self-motivated himself to get back to the table and continue his fight to win every ball.

The remaining 2 games wasn’t a cakewalk for Aruna, he was pressed so much by Jingkun in the tail end of the game, as the Chinese saved a match point at 11-10 but Aruna showed great fighting spirit to make sure Jingkun didn’t claw his way back into the match, deploying his backhands to win big points take it 14-12.

Even with a 2-1 advantage, Aruna didn’t drop his momentum as he wrapped up the victory with an 11-5 in the 4th game, pocketing the match emphatically to storm into the quarter finals of the WTT cup finals.

Regardless of being a lone ranger in the draws in Singapore, Aruna is not fazed by the absence of physical support; instead he continues to draw motivation from the huge support he gets back home in Nigeria and from fans around the world.

“This win is for all my fans and everyone back home in Nigeria and Africa,”

“I always believed that If I was selected to be here that means I’ve what it takes to play, I was not under any kind of pressure, I just wanted to play my game and be myself,” Aruna concluded.

The Nigerian will face Brazil’s Hugo Calderano in quarterfinal after the Brazilian beat China’s Lin Gaoyuan 3-0 in round of 16.