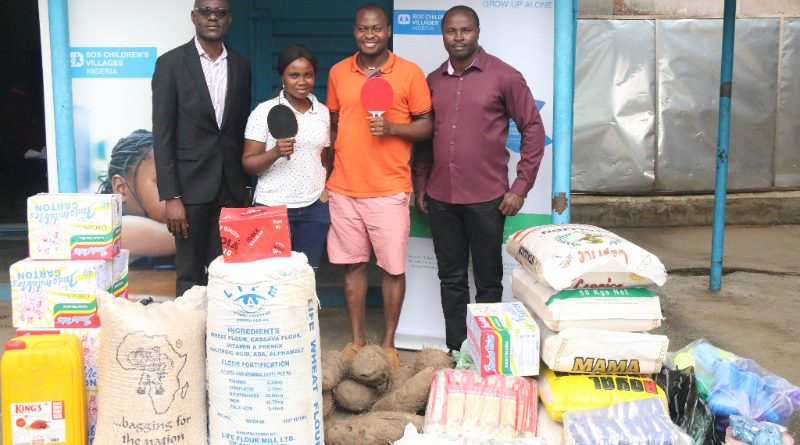 Aruna Quadri on Tuesday, August 28, put smiles on the faces of pupils of SOS Children’s Village International in Isolo, a suburb in Lagos, Nigeria, Extrasportsnigeria.com reports.

Aruna who was accompanied by his wife – Ganiat Aruna, said he decided to show his compassion for the less privileged as he had to go through thick and thin to become what he is today.

They were received at the SOS Village by the National Fund Development and Communication Coordinator, Gboyega Fadowole-Aje who described Aruna’s gesture as commendable while hoping that other sports stars in Nigeria would help the children.

“We want to first of all congratulate you on your victory at the just concluded Nigeria Open and wish you well in your endeavours. We were indeed touched by this your singular gesture and we believe your presence in the Village would surely inspired the children to aim high like you in their endeavours. On behalf of the Country Director, we are grateful and we wish well in your endeavours,” Fadowole-Aje said.

The 2018 ITTF Challenge Seamaster Nigeria Open champion says the gesture has been part of his plans to support the disadvantaged people in the society. “This is another way to show love to those who are not privilege and I believe this small gesture will augment what others have been doing for them. I am doing this to also give back to the society where I emerged from and this will not be a one-off thing as I hope to make it a regular in my plans whenever I am home in Nigeria.”

Apart from the mini table he also donated food items valued at thousands of dollars was given to the home. He also took time out to play table tennis with some of the children in the centre.