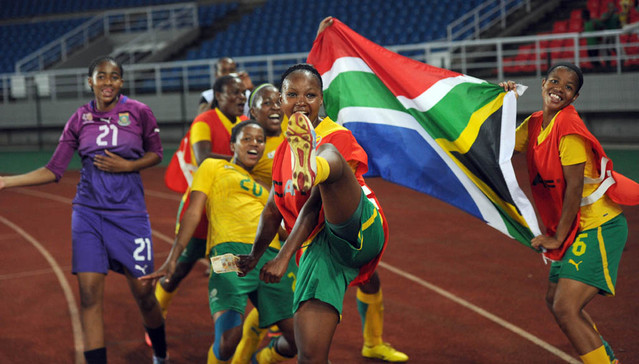 African champions Nigeria began the defence of their Africa Women Cup of Nations title with a disappointing 1-0 defeat to South Africa on Sunday. The match was played at the Cape Coast Stadium, Ghana.

It took just Chrestina Kgatlana’s 84th minute goal to ensure that the Banyana Banyana second their second win against Nigeria in their eleven meetings. The South Africans beat Nigeria for the first time in 2012.

Nigeria’s first chance to score came in the 33rd minute when Asisat Oshoala laid a quality pass for Desire Oparanozie but the attacker wasted the opportunity with a blast over the bar even with the goal out of position.

South Africa’s Jermaine Seoposenwe was close to opening her goals account just before the half time break but Osinachi Ohale cleared the ball bravely as the Banyana Banyana striker was set to strike the ball inside the Nigerian box.

Oparanozie completed the wastage when she lost another chance four minutes into the second half to give Nigeria the lead after her diving header went wide following a promising build up.

Chrestinah Kgatlana then broke the deadlock with six minutes to go as she pounced on a beautiful pass into the Nigerian box and unleashed a shot beyond Tochukwu Oluehi in goal for Nigeria.

The Falcons will have to defeat Zambia and Equatorial Guinea to guarantee them passage to the semifinals and opportunity to qualify for the 2019 FIFA Women’s World Cup in France. The Zambians were 4-0 up against Equatorial Guinea when this report was made.