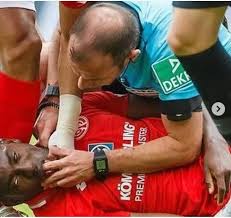 Awoniyi was forced off in the 23rd minute and was replaced by Karim Onisiwo in his side’s 1-0 loss to Augsburg in Sunday’s Bundesliga game.

Awoniyi was carried off with his neck in a brace and was motionless before he was rushed to the hospital for further observation.

The coach confirmed that the Nigerian forward suffered a severe concussion.

“We have received the all-clear from the doctors. He has regained consciousness and can remember the things that happened,” Beierlorzer told AFP.

“He has a severe concussion and has to stay in the hospital for observation.”

Awoniyi has featured in 11 league games, scoring one goal since his arrival at Opel Arena on loan last summer from Liverpool.

The Nigerian attacker has been with Liverpool since 2015 but he is yet to feature for the Premier League club, having spent most of his time on loan, playing for Frankfurt, NEC, Royal Excel Mouscron and Gent.

Mainz are now three places above the relegation zone after struggling to gather 31 points from 31 games.

The forward made his mark at the 2013 U17 World Cup, scoring four goals in the competition to help the Golden Eaglets win the title.

Awoniyi has played for Nigeria’s U20 and U23 teams.