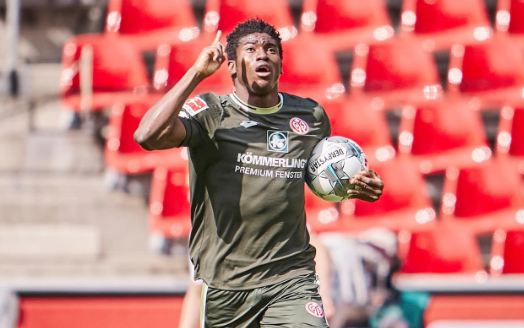 Taiwo Awoniyi came off the subs bench in the 56th minute to score five minutes later for visitors Mainz 05 at Cologne on Sunday as the German Bundesliga continued its restart after the disruption by the Coronavirus pandemic.

Borussia Dortmund defeated Shalke by 4-0 as the Bundesliga resumed on Saturday.

It was the first goal in the Bundesliga this season for the 22-year-old Nigerian striker, who is on loan from Liverpool. It was also the first goal by any Nigerian in that league as football returns to Germany ahead of other major leagues in Europe.

He has now made seven appearances for his club mostly as a substitute.

Cologne were leading 2-0 before Awoniyi pulled a goal back on the hour, just five minutes after he was introduced.

It was the lift Mainz needed as they then drew level at 2-2 in the 72nd minute. Mainz are just four points clear of the drop zone in 15th place with 27 points from 26 matches.

The Bundesliga games are being played behind closed doors. On Saturday there was an eerie atmosphere at Dortmund’s iconic Signal Iduna Park stadium, with every shout by players or coaches audible, and social distancing protocol followed by substitutes and during goal celebrations. It was so because the stands were empty.