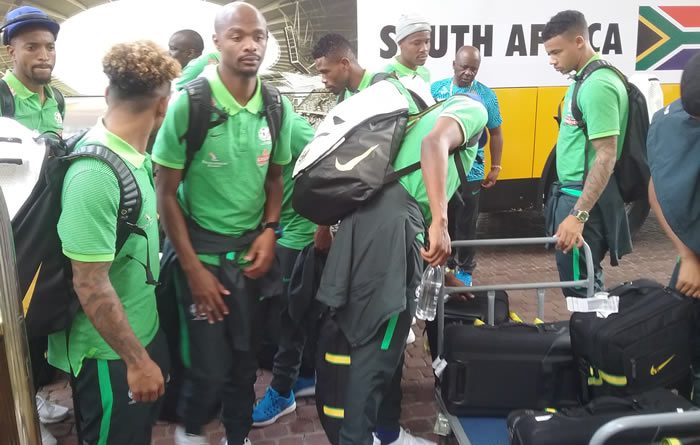 South Africa’s Bafana Bafana, arrived in Uyo, the Akwa Ibom State capital on Thursday ahead of their 2019 Africa Cup of Nations qualifier against the Super Eagles. The South Africans had touched down in Lagos on Wednesday aboard a South African Airways flight, Extrasportnigeria.com reports.

Bafana Bafana coach Stuart Baxter says it’s vital that they try and keep it tight and silence the crowd in Uyo when the match holds on Saturday.

He said, “I think we’ve got to shut the crowd up. That’s one of our big jobs. If we let the crowd get excited and Nigeria enjoy the game, then I think that’s going to be a big plus for them.

“I think we can turn that around and frustrate them a bit, and be better than they think and have more to say than they think, then maybe the crowd could be a bit negative for them,” Baxter said.

“With the mental part of the game, the boys have to feel that this is one where we can spoil the party a bit. We can make it difficult for Nigeria.”

But Nigeria coach Gernot Rohr is not sitting with arms crossed. The Nigeria coach believes Bafana are the strongest opponents he will get to face since taking over as head coach of the Super Eagles.

Rohr said, “They are the strongest opponent I will face so far as Eagles coach because they have not lost a match over a long time. I’m also aware that they stopped Nigeria from getting to the AFCON in 2015, and that this match is very important for Nigeria. The game will be difficult, it will be a big challenge to beat the South Africans.”