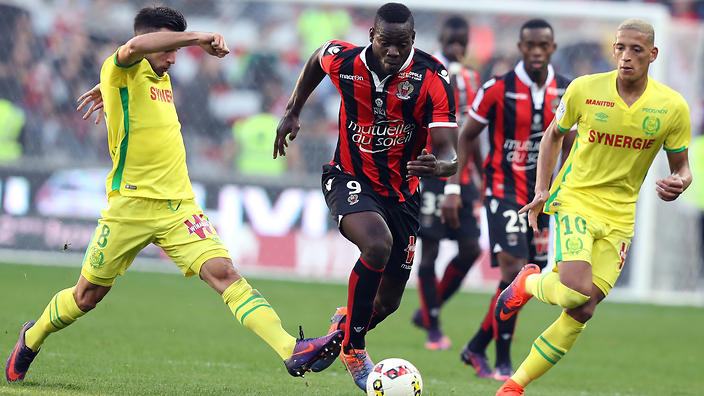 After his drop in the English Premier League and the lowly time spent in Italy hardly anyone imagined that Mario Balotelli would make an immediate in impact in France. But now Nice fans are dreaming of seeing their Balotelli-fuelled underdogs do a Leicester and steal the French title from the likes of crisis-stricken Paris Saint-Germain.

Balotelli’s double in a 2-1 victory over Dijon on Sunday ensured Nice will go into the winter break on top of Ligue 1, and victory over Bordeaux on Wednesday would only add to the embarrassment of their well-heeled rivals.

Balotelli, so often the misfit in England and his native Italy, has now scored eight goals in eight games in an injury shortened half-season.

The Cote d’Azur side have also benefited from the sensational form of Alasane Plea, 23, who has hit 10 goals. Dante, the former Bayern Munich stalwart, has been a rock in defence.

Nice have lost only once in 18 games and are four points ahead of Monaco and seven in front of PSG. So is the championship possible?

“Without injuries, without European competition, without the League Cup, why not?” said former Olympique Marseille and Bordeaux coach Rolland Courbis.

Despite their hot Ligue 1 form, Nice have crashed out of the Europa League and France’s League Cup. Monaco and PSG are both still going for the Champions League as well as all domestic trophies.

“Nice remind me of what we saw with Leicester last year,” said Toulouse coach Pascal Dupraz.

“They are dynamic, fresh, they have good technique and well-marshalled players. You can see that Nice have gone up a gear,” he added after his side were beaten by the surprise leaders earlier this month.

Leicester City were helped by weaknesses exposed in the Premier League’s big-spending giants, and Nice have also taken advantage of PSG’s disastrous start to the season.

Their four defeats so far, the latest at Guingamp on Sunday, have left PSG coach Unai Emery worrying about his job.

Nice coach Lucien Favre is following the example of Leicester counterpart Claudio Ranieri and refusing to discuss winning the title.

“We have 43 points, we are safe (from relegation),” he joked after the Dijon win.

Favre can see the practical and tactical minefield ahead – Balotelli played as a solo centre forward against Dijon, forcing Plea out onto the wing, a position he does not like.

“The truth is it’s difficult,” said Favre. “Mario scored braces against Marseille, Monaco and now Dijon as a lone centre forward. Alassane scored nine of his 10 goals when Mario was absent. That’s it!” he added with a smile.

Key midfielders Younes Belhanda and Jean-Michel Seri will be playing at the Africa Cup of Nations in January for Morocco and Ivory Coast respectively.

Courbis said that Balotelli has to put in more regular performances “which he has not been doing so far.”

The injury list, which includes Valentin Eysseric and Brazilian left-back Dalbert, is also growing. Even the 33-year-old Dante is scheduled to have tests on his knee.

Favre did throw aside his normal caution on Sunday to condemn the fixture pile-up which will have seen Nice play 10 matches in 31 days up to the start of the break on Thursday.

“I don’t know who organised it, but its too much. It’s unmanageable,” Favre said.

The players are still enjoying the heights however.

“The aim is to go as high as possible, not set ourselves any limit,” said goalkeeper Yoan Cardinale.

“There is still a lot to do. Autumn champions does not go on the list of trophies won.”

Courbis said it would be “exceptional” for Nice to finish the season in the top three, having ended fourth last year.

Other cautious observers recall how Nice were top of the table in December in the 1972-73 and 1975-76 seasons. Each time they finished second.