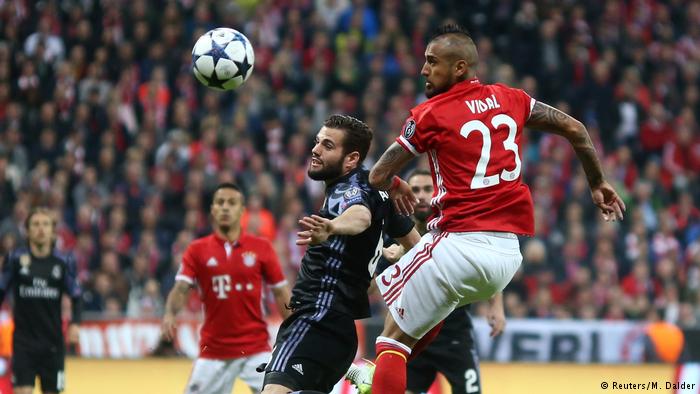 Carlo Ancelotti believes Bayern Munich can still turn around their Champions League quarter-final 2-1 loss at home when they travel to Real Madrid.

Wednesday night was special for Ronaldo as he netted his 100th European goal and scored both goals in Real’s 2-1 comeback win at 10-man Bayern, who had Javi Martinez sent off.

Bayern should have been 2-0 up at the break, but Arturo Vidal, who headed the hosts into a first-half lead, skied a penalty.

The game turned after the break as Ronaldo equalised, then Real dominated Bayern with the numerical advantage and peppered the Bayern goal.

Real deserved the win which Ronaldo sealed by reaching the 100-goal milestone on 77 minutes.

It could have been a higher score and Real captain Sergio Ramos had the ball in the net late on, but the goal was disallowed.

Ancelotti says the Germans still have a fighting chance in the return leg in Madrid on Tuesday.

“We don’t have a big chance, but we still have a chance – we’re still alive,” said Ancelotti.

“They could have killed it (the tie) by scoring another goal, but they didn’t.

“We had the game under control in the first-half, but we losed our efficiency after the break.

“It made life hard when we went behind, but we still have a chance.”

Ancelotti hopes to have striker Robert Lewandowski, who missed the first leg with a bruised shoulder, and defender Mats Hummels both back for the return in Madrid.

Germany goalkeeper Manuel Neuer kept Bayern in the tie with a string of saves and believes his team can book a sixth straight semi-finals berth.

“It’s important to finish the game with 11 men,” said Neuer, on his first game back after foot surgery.

“We didn’t have so much possession and we were missing our usual self-assurance.

“It could have finished much higher, but we believe we can still do it.

“We were the best team in the second half and it could have been two or three nil up.”