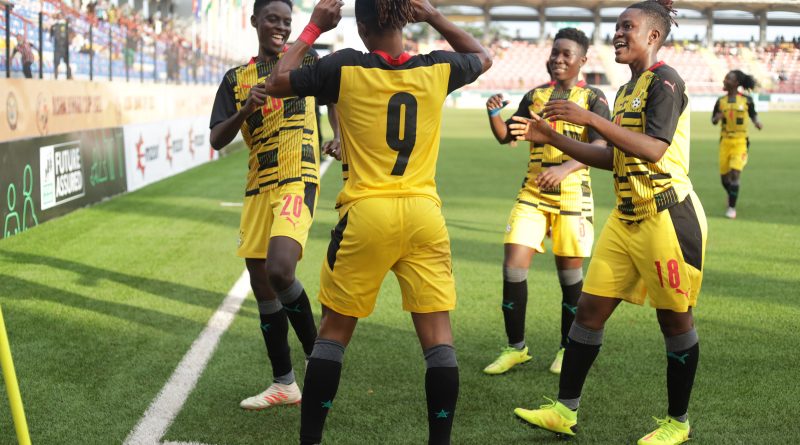 It was another very entertaining Monday evening at the Aisha Buhari Cup with the match which ended with Ghana inflicting a 2-0 defeat on the Indomitable Lionesses of Cameroon. The Cameroon have left the tournament without a point and without scoring a goal.

The Lionesses who lost to the Atlas Lionesses from Morocco on Day 2, came out strong to make something out of this showpiece staged in honour of Nigeria’s First Lady. It failed as a determined Ghana mounted onslaught after onslaught at the fore, with Vivian Konadu, Elizabeth Owusuaa, Princella Adubea and Nina Norshie delighting the crowd with their skills.

The damage could have invariably been greater if not for the alertness and agility of Cameroon’s goalkeeper Gabrielle Bawow Ange.

In the second half, Adubea, ever a handful, escaped the offside trap and schemed past the goalkeeper but the ball drifted away. However, on the hour mark, the nifty forward teased two defenders and scored by chipping the ball to the goalkeeper’s blind side from a counter-attack.

Boakye, bulwark at the rear and threatening going forward, tested the goalkeeper with a chip from 20 yards that drifted narrowly wide in the 73rd minute, and nine minutes later, Cameroon’s Bella Rose shot sky-high right inside the six-yard box.

A minute to full time, Adubea, left to her own device on another quick counter, found Konadu, who took on three defenders drifting into a shooting position before firing past hapless Bawow Ange.

Cameroon finished the tournament on a big low, but Ghana would be happy to have put behind them the horrendous 3-0 trouncing by South Africa’s Bafana Bafana on Day 3.

The top two teams in women’s football on the African continent at the moment, Nigeria and South Africa, will face off in what is a potentially-explosive battle on the final day at Mobolaji Johnson Arena on Tuesday evening.

The game will kick off at 4pm.

The Super Falcons, nine-time champions of Africa, narrowly edged the Banyana on penalties in the final of the 2018 Women AFCON in Ghana, after both teams could not be separated in regulation and extra time.

On the opening day of the tournament on Wednesday, the Super Falcons defeated the Female Eagles of Mali 2-0, both goals coming off substitute Gift Monday late in the second half.

Banyana Banyana were truly dominant and impressive in their 3-0 demolition of Ghana’s Black Queens on Friday.

A total of eight goals have now been scored in the tournament. Only Nigeria’s Gift Monday has scored more than one goal.