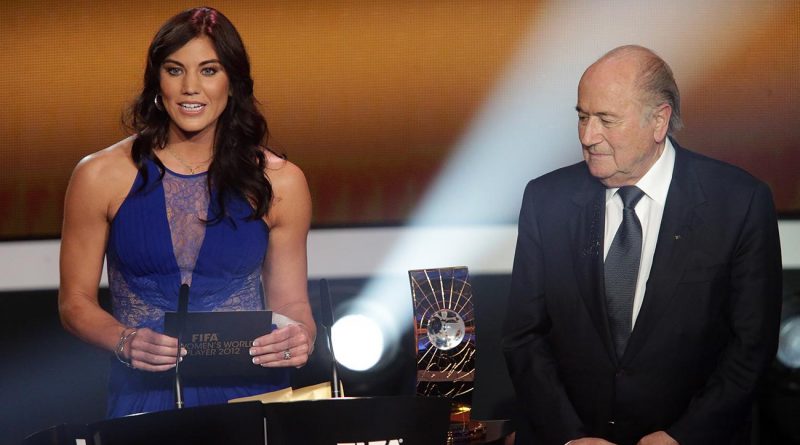 The 81-year-old Swiss hit back at the sexual assault allegations made by the former USA international female star after she said he ‘grabbed my ass.’

The disgraced former FIFA president was accused of grabbing the former USA international’s backside at the Ballon d’Or awards bash four years ago.

But AP claim that Blatter has rejected those claims after Solo told Portuguese newspaper Expresso he “grabbed my ass” at the prestigious event.

The 36-year-old shotstopper spoke of her “shock” after the incident occurred just seconds before she and the Swiss man took to the stage to present an award to her international team-mate Abby Wambach.

Solo had said on Friday, “I was in shock and completely thrown off.

“I had to quickly pull myself together to present my team-mate with the biggest award of her career and celebrate with her in that moment, so I completely shifted my focus to Abby.”

Solo, when asked why she has not spoken out on the incident before, added: “I was nervous for the presentation. It was the Ballon d’Or I was presenting.

“After that I didn’t see him and that was kind of bad. I didn’t get to tell him directly ‘don’t ever touch me’. That’s the way I’ve always handled things – directly.”

A growing number of public figures have been accused of sexual harassment in recent weeks, sparked by multiple women speaking out against the Hollywood mogul Harvey Weinstein.

Representatives for Blatter, who was forced to quit his role as football’s most-powerful man in 2015 amid a bribery scandal, immediately denied the star’s claims as “ridiculous” before he spoke to AP Sunday morning.