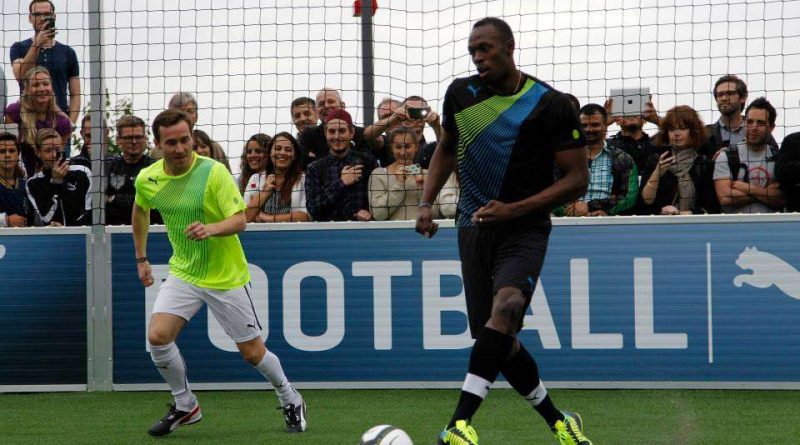 Usain Bolt will finally make his footballing debut at Old Trafford it has now been confirmed.

The eight-time Olympic gold medallist will captain a team of celebrities and footballers for the Soccer Aid match on 10 June.

“It’s my dream to make it as a professional footballer. To play against some of football’s biggest legends is going to be remarkable,” the Jamaican sprinter said.

Robbie Williams will captain rivals England for the UNICEF match.

Usain has spoken previously about wanting to get into professional football after retiring from athletics last year.

And over the weekend he put out a cheeky tweet – which led to much speculation – hinting he’d been signed to a club.

“Robbie and his England team better watch out as I won’t be going easy on them,” said Usain, adding that he’s got a “special celebration” planned should his team win.

The 31-year-old is a Manchester United fan, and once even made a surprise call to MUTV, its TV channel.

“I always said that I want to cope in more of a team sport because the track is individual,” he told the football club.

“I catch along easily and understand what I need to do when I get a job. When I get instructions, I can carry them out really well,” he said.

The Soccer Aid game at the team’s home ground will see celebrities and former world-class footballers playing together on the same team, the BBC reported.

The event, which takes place biannually, has raised £24 million to help children since its launch in 2006.

The match has seen the likes of footballers Maradona, Alan Shearer and Ronaldinho play alongside celebs like Mark Wright, Jack Whitehall and Olly Murs.

“Reclaiming the title for England this year is going to taste so much sweeter with Usain leading the Soccer Aid World XI,” said Robbie Williams, who co-founded Soccer Aid.

“I can’t wait to lead out the England team.”