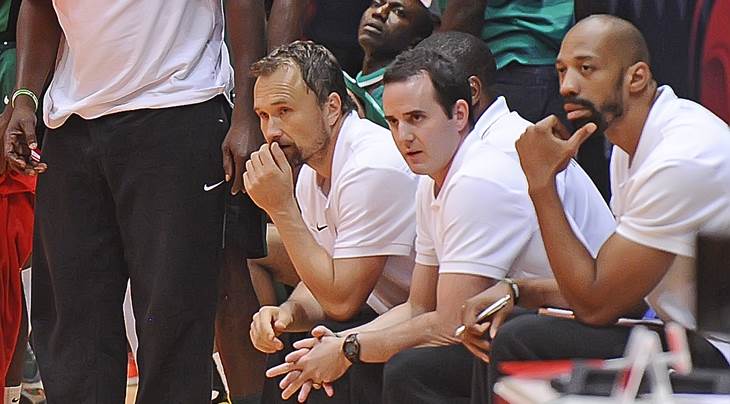 Nigeria’s rise to prominence in African basketball and on the world stage is owed to many things.

There is no shortage of talent, determination or savvy in the squad, and there is also no lack of enthusiasm, commitment or tactical nous when it comes to Will Voigt and his coaching staff.

Among Voigt’s assistants is Philadelphia 76ers player development coach John Bryant. The 34-year-old was a part of the Nigeria braintrust when the team captured its first FIBA AfroBasket title in 2015 and he was also with the team at the 2016 Rio de Janeiro Olympics. Bryant spoke to FIBA.com.

Why did you get into coaching?

I had a brief career as a player that I had to finish because of injuries. I had remembered that one of my coaches had told me that I had the potential to teach basketball because of my leadership and also because I had skills to teach the knowledge that I have of basketball. Coach Will Voigt, who mentored me, has been very important to me in my career so far.

What was your connection to the Nigerian national team?

I was working in the D-League under the Sixers’ umbrella and also working on scouting some prospects for the NBA Draft when Will Voigt called to tell me that he was competing for the position of Nigeria’s national team head coach. He told me that if he got the position he would do his best to have me work with him. He got the position and I started working with him and with the D’Tigers. That’s how it all started.

How do you rate the experience with Nigeria?

I’ve enjoyed it so far and learned a lot. The people of Nigeria, the connection with the team and the guys we work with – everything is very good and solid. I remember when I first landed in Abuja for AfroBasket training camp and I’ll never forget it. I knew from day one that the group was great and we could do great things together. The players have worked hard and made the whole experience amazing. I talk pretty often with them. I feel so proud to be a part of helping basketball grow in Nigeria and in Africa in general.

There are challenges related to the infrastructure in Africa. How do you cope with that?

We have to do the job and we’ve been doing it pretty well so far. From the staff to the players, we’ve done great things and we need to keep being in the same dynamic. Work and ambition overcome every difficulty.

How about the progression of D’Tigers the last couple of years?

Before I started my work for Nigeria’s national team, I talked to Ike Diogu, whom I coached while I was working in the NBA D-League, about the team and I watched all the games they played during the London Olympics. I wasn’t particularly surprised by how talented Nigerian players are. The talent is there. All we need to do is keep working hard and keep learning. Nigeria has so many talented prospects; the country is full of guys that can become very good basketball players. With hard work and motivation, we can improve and make basketball in Nigeria reach another level. The goal is to keep improving and remain one of the most competitive teams on the continent and to compete against the best teams in the world.

What will the aims be for Nigeria at FIBA AfroBasket 2017?

Fighting for the title, that’s for sure. By being the defending champion, Nigeria has to fight to keep this title. The competition will be very intense because a lot of teams will try to win the tournament. But Nigeria plays to win. At the last AfroBasket and in Rio last summer, we fought hard and we’re known now for being a competitive team. We need to keep the same positive and competitive dynamic in order to keep growing and improving.

You work with Sixers star Joel Embiid of Cameroon on a daily basis. What can you say about him and what about the comparisons people have made to him and Hakeem Olajuwon?

Joel represents the continent and has a lot of impact on African basketball. He’s such a talented kid, a hard worker and he has such a high basketball IQ. I’m very proud of him and the impact that he has on basketball in Africa. Joel is still very young and has a lot of room for  improvement. As for Olajuwon, he’s trying to build his own legacy. Joel has all the tools to have a great career and wants to be himself