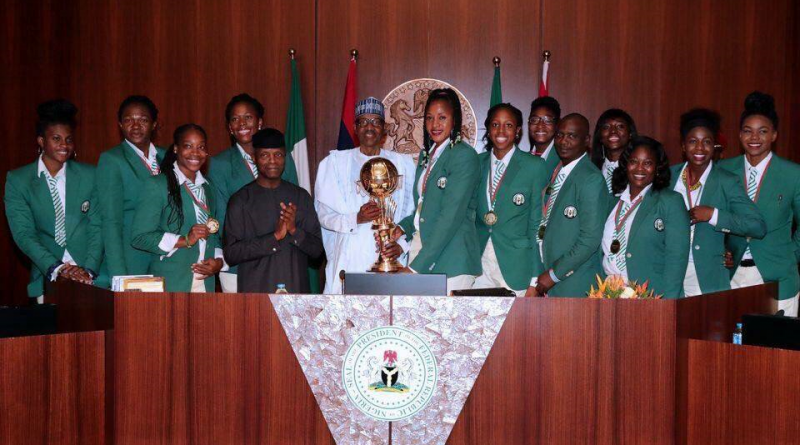 Pius Ayinor
President Muhammadu Buhari on Wednesday received the players and officials of the D’Tigress, the Nigerian women basketball team that just won the African cup. Nigeria defeated Senegal 65-48 on Sunday to emerge African champions, Extrasportsnigeria.com reports.
President Buhari gave N1 million each to the players and also gave team officials N500,000 each.
Buhari made the announcement at the commencement the weekly federal executive council (FEC) meeting on Wednesday – the first he would attend since he returned from his medical leave in the UK.
The captain and centre Aisha Mohammed, said the cash reward from the president would encourage them to push for gold next year in Spain.
President of Nigeria Basketball Federation, Musa Kida said the team won because of the “democratic process that has returned to the federation.”
He expressed optimism that the team could achieve the same success when they go to Spain for the world championship.
The players returned to the country on Monday via Lagos and were received by the sports minister Solomon Dalung on Tuesday in Abuja. The men’s team are training in Lagos for the AfroBasket for men holding in Tunisia and Senegal from September 8.