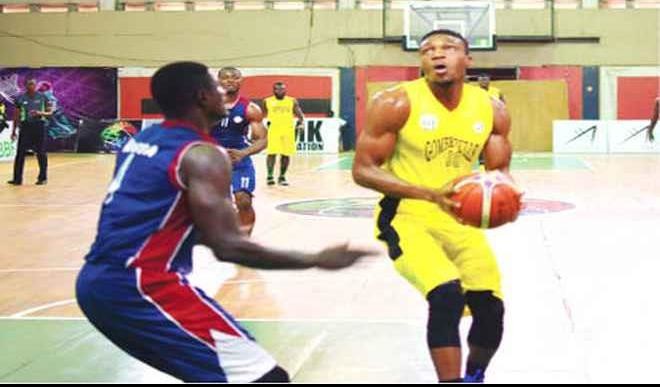 Thursday is rest day for teams in the FIBA Africa Zone 3 qualifiers for men holding in Lagos, Nigeria but even as they take their rest, the top two teams from this competition are already known to the spectators, Extrasportsnigeria.com reports. On Wednesday Nigerian champions Kano Pillars and runners up won their matches to maintain unbeaten runs and the top two positions as the competition gradually rounds off.

In the last match of Wednesday that was a Nigerian Savannah Conference derby, Gombe Bulls defeated Mark Mentors 75-67 to stay ahead. The Bulls led all through the quarters with 19-18, 37-34 and 60-49 for the third quarter. It was a very close game until the last minute when Bulls pulled away and thus cancelling the thoughts of the match going into OT.

Former Nigeria shooting guard Abdulrahman Mohammed now in charge of Bulls spoke to the media after the match.

He said, “I have a lot of respect for Mark Mentors. They are one of the most technical groups in this tournament. I knew it was going to be tough. We didn’t stick to our game plan; we knew they were going to come at us with a great offense and defense and at some point we got a little bit carried away.

“At that crucial moment Kator Gar had to bail us out when we needed him because the captain has always carried the team. And he stood up at the right time with some great shots.”

Those shots came in very late and handy and they separated both sides.

Before the game, Pillars dispatched ASPAC from the Republic of Benin 81-63.

In a separate development, one of the Nigerian teams in the competition, Civil Defenders pulled out of the event after just two games in Lagos. The Abuja based side withdrew without any official statement but it was learnt that they were facing financial pressures as they arrived in Lagos with practically no budget. Efforts made to raise money in Lagos as planned failed and they just walked away unannounced.