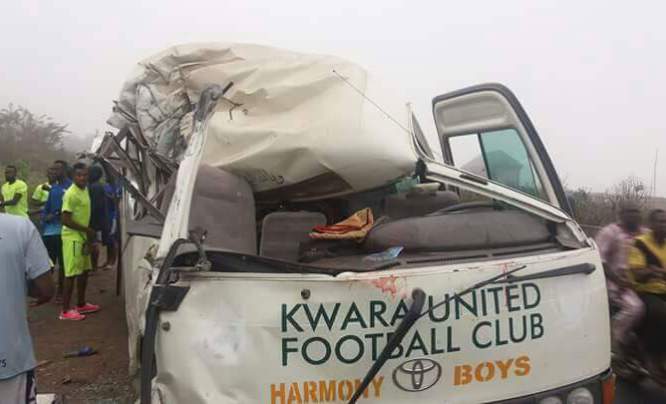 Unpleasant news hit the Nigerian football family Wednesday morning as a bus carrying Kwara United football team was involved in an accident as they journeyed back to their Ilorin base. The accident has left many of the players injured and needing hospital treatment.

The players were on their way home from Lagos after featuring in the Bet9ja Nigeria National League Super Four competition which ended on Tuesday. An eye witness said the bus lost control and then swerved off the road.

The Media Officer of the NNL Amar Ignis confirmed that No fatalities was reported based on the immediate report though several players needed treatment.

A team official said, “Players and officials on our team bus were on our way to Ilorin when our bus was involved in an accident along Lagos-Ibadan Highway.”

The club is billed to release official statement on the incident later today.

The team secured promotion to the Nigeria Professional Football League last August after two seasons in the lower division.

Kwara are scheduled to host Niger Tornadoes of Minna at home on Sunday in their match day one fixture of Nigeria Professional Football League.

Incidentally, the coach of the team John Obuh and Ramson Madu were crowned the Best Coaches of Bet9ja NNL as the Super 4 Tournament rounded off in Lagos.

Obuh and Madu theTechnical Advisers of Kwara United of Ilorin and Heartland Football Club of Owerri received accolades for their outstanding performances in the closed season.

Obuh and Madu ended the season as leaders of the Northern and Southern Conferences.

Striker Michael Ohanu of Kwara United got crowned also as the highest goal scorer for the season with his 21 goals effort.