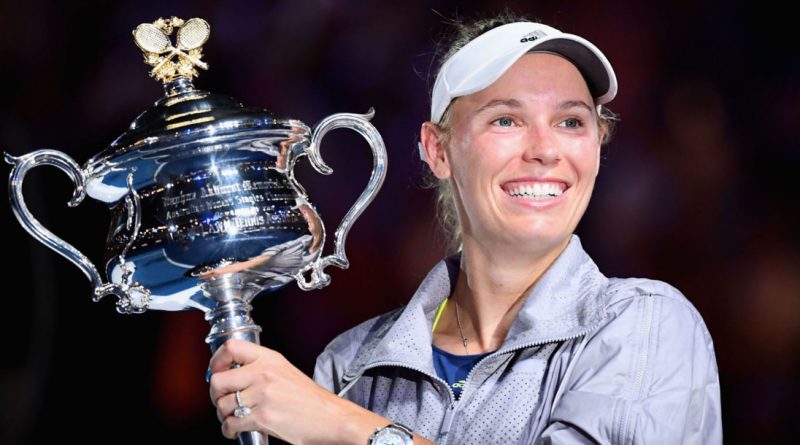 One of the first things she did as a champion was apologize to top-seeded Simona Halep following her 7-6 (2), 3-6, 6-4 win in the Australian Open final on Saturday night, according to a Sports Illustrated report.

Wozniacki, more than seven years after appearing in her first Grand Slam final at the 2009 U.S. Open, can remove the ”but never won a major” footnote that has long been associated with her career.

”I’m sorry I’m just taking a second to hug Daphne,” she said of the trophy for the women’s singles champion. ”I dreamt of this moment so many years, to be here now it’s a dream come true.”

She’ll also regain the top ranking for the first time in six years, a record between stints at No. 1 in the Open era, in another benefit of beating the top-seeded Halep.

It was the first time in the Open era that players ranked No. 1 and 2 were meeting in a major final without either having won a Grand Slam title.

So the pressure was on.

”I know that today is a tough day,” Wozniacki said to Halep. ”I’m sorry I had to win today but I’m sure we’ll have many matches in the future. Incredible match, incredible fight. And again, I’m sorry.”

Halep, who was playing with an injured left ankle and had rallied from a break down in the third set to lead 4-3 when Wozniacki took a medical time out to have her left knee taped, just ran out of steam.

”It’s not easy to talk now, she played amazing,” Halep said. ”It’s been a great tournament for me. I started not very well with the ankle injury. I just wanted to give my best every match, which I did. Of course I’m sad I couldn’t win today but Caroline was better than me.

”Sad that I couldn’t make it the third time, maybe the fourth time will be with luck.”

Serena Williams – who is such a close friend that she took Wozniacki for a consolatory beach holiday soon after her break-up with Rory McIlroy in 2014 – was even more effusive. “I get too nervous to watch,” wrote Williams on her Twitter page, “but woke up to Caroline Wozniacki new No 1 and Aussie Open champ. So awesome. So happy. Are those tears? Yup they are.”

Few in the tennis world will begrudge Wozniacki her moment of fulfilment, for she is one of the friendliest and most reliably upbeat women on the tour. Yet Maria Sharapova’s agent Max Eisenbud might be an exception. Last year, incensed by some critical comments that Wozniacki had made about his client’s return from a doping ban, Eisenbud called her a “journeyman player”, and suggested that Sharapova’s absence represented her “last chance to win a slam.”

That comment has not aged well, especially as Wozniacki geared up for this career-crowning triumph by winning the WTA Finals in October.

Saturday’s win was no one-off lightning strike but the culmination of almost 18 months of ever-improving results, dating back to the low point when she was ranked No 74 at the 2016 US Open. Sharapova, by contrast, is still languishing at No 41 in the rankings.

Asked about the travails of 2016, Wozniacki replied: “I think just I’d been through a lot of injuries at that point. Then you start losing to some players who you’re not really thinking you should lose to. It’s frustrating. You start doubting if you’re ever going to be 100 per cent healthy for longer periods of time. But I think last year, already for a year and a half, I’ve proved that I can beat anyone out there on court.”