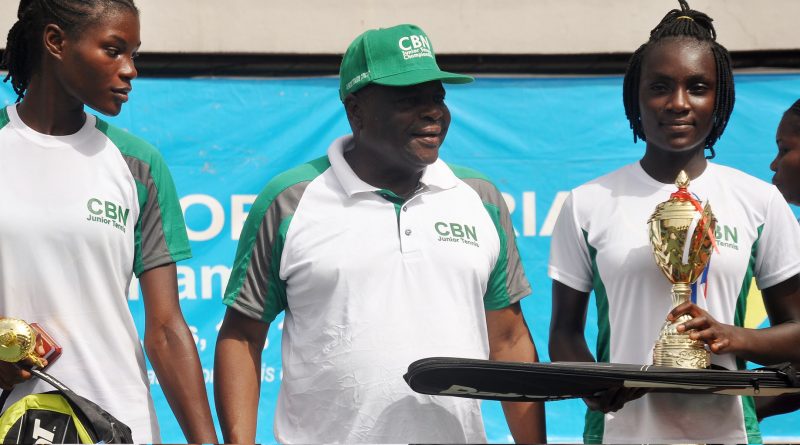 Unseeded Favour Moses from Kaduna topped her spate of upset wins with the Girl’s 16 title which she won in a very close contest against third seeded Omolade Aderemi from Ondo in the final match of the CBN Junior Tennis Championship which rounded off at the Lagos Lawn Tennis Club Saturday.

Moses who has been knocking on the door of a breakthrough for a while was obviously nervous but her abundant talent and level of skills saw her through the tie break which she took to win the match 9-8.

A tennis talent to watch, the soft spoken youngster who is sponsored by the AMK Foundation also got the most outstanding female player of the tournament award.

The Kaduna team also won the Boys’ 16s title through Gabriel Friday who beat Martins Abamu 9-8. Both players flew out same night to Tunisia where they will be representing Nigeria in the ITF/CAT Africa Junior Championship.

The Yakubu sisters from Lagos took home two trophies. Oiza playing in the Girls 14 beat Chidinma Ezeh from Anambra 9-7 while Nene won a series of round robin matches in the Girls 10 & under category.

The Port Harcourt based Kodian Tennis Foundation was also outstanding with a title and two runner-up positions.

Precious Ikeuba defeated Seun “Nadal” Ogunsakin from Ekiti 9-6 to win the Boys’ 10 trophy while Philip Pyagbara and Victor Friday where runners-up to Mubarak Ganiyu from Oyo and Daniel Adeleye from Ekiti in the Boys’ 10 and 14 respectively. Ganiyu won the most outstanding player award for the boys for his fearless and unrestrained shot making.

Central Bank Governor, Godwin Emefiele, represented by acting director Corporate Communications, Isaac Okoroafor, said, “The bank is happy that the cardinal objectives of investing in the junior tennis project are being achieved. Last year Marylove Edwards, the 14 & Under champion, reached the finals of the senior event and is now abroad to pursue a professional career. At least five of the juniors are in the top 30 of the national senior ranking list.

“The fact that champions are emerging from all parts of Nigeria clearly shows that the International Tennis Academy is doing a really good job.” he added.

A record number of 215 juniors attended the week-long championship.