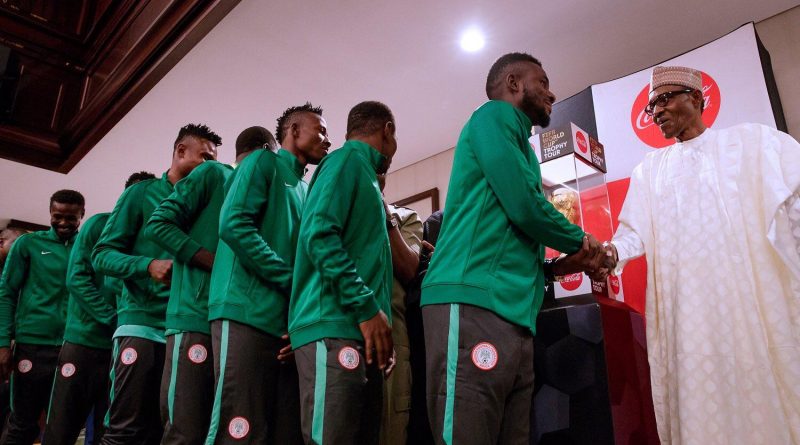 In the last one year athletes that visited the Presidential Villa in Abuja left happily after meeting with President Muhammadu. There was always huge cash flow for teams. But you can’t say the same for the home-based Eagles who were guests of the President alongside other teams on Wednesday. Buhari also received the FIFA World Cup trophy in Abuja on Wednesday and also hosted the Bobsled and Skeleton athletes who made history by becoming the first Nigerians to compete at the Winter Olympics.

Home-based Eagles players and their officials are said to be disappointed after no cash reward was offered them following Wednesday’s visit.

The Eagles finished second behind hosts Morocco at the African Nations Championship in February after going down to a 4-0 defeat.

The players who were expecting cash rewards left disappointed as they were only offered handshakes for their efforts at CHAN.

“Disappointed is an understatement, we were hoping to get something meaningful from the president for our performance at CHAN, but nothing came out,” a member of the team who spoke on the condition of anonymity told CSN.

“I wonder why they organised the reception in the first place when they knew the only thing they would give us is handshake.”

His teammate added, “To say we had to wait this long for the reception makes the whole thing very painful. You can also imagine us travelling from different parts of the country to Abuja and getting nothing in the end.”