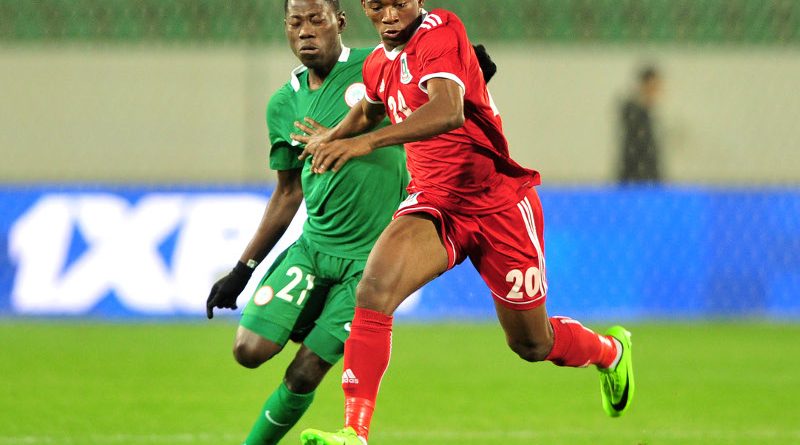 Nigeria sailed into the last eight of the 5th African Nations Championship in Morocco after coming from a goal down to thrash Equatorial Guinea 3-1 in Agadir.

The Super Eagles B created a basketful of chances in each of their first two matches against Rwanda and Libya, but had only Sunday Faleye’s 79th minute winner against Libya to show for their marksmanship in the tournament before kick –off at the Stade d’Agadir.

The string of misses continued against the neighbours to the south Faleye missed from inside the box after good work from Emeka Ogbuh on the right and Osas Okoro’s shot from a 23-yard free kick in the 25th minute was simply wayward.

From a corner kick, Equatorial Guinea took the lead with five minutes to half time as Nsi Eyama’s powerful header flew past goalkeeper Ikechukwu Ezenwa and defender Daniel James into the net.

Faleye had a great opportunity to level up three minutes later as Anthony Okpotu chested down a pull out for him, but he fluffed it with only the goalkeeper to beat.

In the second half, the Eagles bungled two further opportunities to level up within seven minutes, before Okpotu sneaked in –between two defenders to power home a header from Osas Okoro’s in –swinger for the leveller, in the 59th minute.

Three minutes later, veteran Rabiu Ali came in for Ifeanyi Ifeanyi, and it was the 2014 bronze medallist who made the second goal and scored the third.

From a loose ball, he found an on-rushing Dayo Ojo whose shot from 25 yards flew past the Guinean goaltender and into the net on 69 minutes, and then scored from the penalty spot seven minutes from time after Okpotu was doubled-teamed in the box.

Substitute Mohammed Nur could have scored a fourth but he completely missed another Okoro in –swinger.

The result means Nigeria finished as Group C winners, and will return to the more familiar Grand Stade Tanger for their quarter final against the second-placed team in Group D on Sunday.

Victory in that game will mean another city movement, this time to Marrakech for the semi finals on Wednesday next week.

In already set quarter final matches, hosts Morocco will take on Namibia in Casablanca on Saturday afternoon, while Zambia play Sudan in Marrakech on Saturday evening.