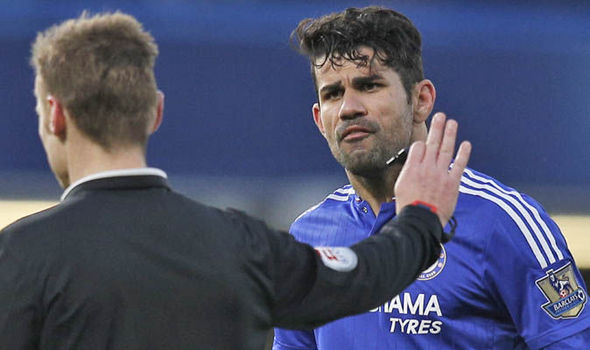 Diego Costa’s future at Premier League leaders Chelsea was plunged into doubt on Friday after their leading scorer was dropped for Saturday’s away match with champions Leicester.

The 28-year-old Spanish international, who has scored 14 goals in 19 games this season, is believed to have had a bust-up at the club over the level of his fitness and has not trained all week.

The bombshell news came after the Brazil-born, naturalised Spaniard was reportedly linked with a lucrative salary offer from a Chinese club worth a mind-boggling £30million (€34m, $36.5m) a year.

Only last month Chelsea manager Antonio Conte had been singing the player’s praises saying he was a reformed character from the one who had sulked his way through the previous unhappy campaign.

“It’s fantastic and it’s important to continue this way. Diego for sure is a great striker.

“He is enjoying playing his football. Now he is showing his passion in the right way.”

Costa signed a five-year deal on his arrival in July 2014 for £32m from Atletico Madrid which leaves two-and-a-half years to run on his contract and Chelsea owner Roman Abramovich is believed to be unwilling to sell him.

The striker had wanted to leave at the end of last season – although he insisted it wasn’t because of Chelsea but for family reasons – and was linked with a return to Atletico before changing his mind.

“Did I want to go? Yes, yes, I was about to leave,” he said earlier this month.

“But not because of Chelsea.

“There was one thing I wanted to change for family reasons but it wasn’t to be, and I continue to be happy here.”

His goals have been instrumental in Chelsea going on a 13 match winning run in the Premier League which was brought to an end by a 2-0 defeat at the hands of fellow London side Tottenham Hotspur just over a week ago.

In his absence on Saturday, Belgian star Eden Hazard could replace him up front as he did against Bournemouth when the Spaniard was suspended.

However, regardless of Abramovich’s determination not to offload him, one English bookmaker cut the price of his leaving in the January transfer window to 2/1.