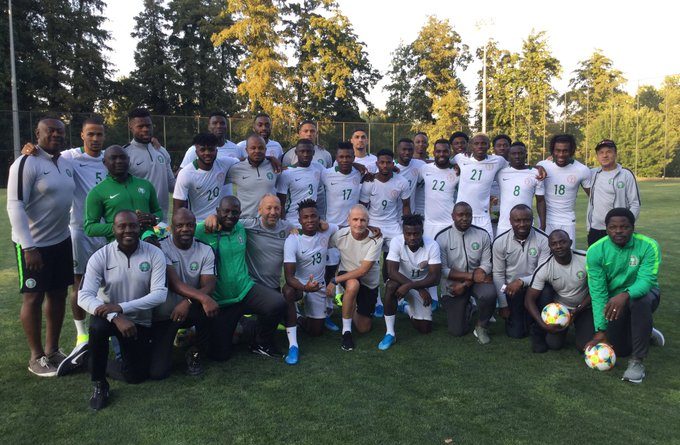 The Super Eagles have arrived in the city of Dnipro, Ukraine ahead of Tuesday’s international friendly with the senior national team of Ukraine, with 18 players a part of an early morning team walk on Sunday.

Spain-based defender Chidozie Awaziem arrived the team’s hotel, ahead of defenders Olaoluwa Aina and Oluwasemilogo Ajayi, and Kelechi Iheanacho who were being expected at just after noon.

The training session was fixed at FC Dnipro’s training ground at Dnipropetrovsk, within the Pridniprovsk housing estate.

Tuesday’s clash will take place at the 31,000-capacity Dnipro Arena, home ground of top club FC Dnipro, and will kick off at 9.30pm Ukraine time (7.30pm in Nigeria).

It is the first assemblage of the three-time African champions since finishing third and with the bronze medals at the first-ever 24 –team Africa Cup of Nations staged by Egypt June/July this year.

For the Super Eagles, the game also serves as part of the preparation for November’s 2021 Africa Cup of Nations qualifying duels with the Squirrels of Benin Republic and the Crocodiles of Lesotho.

Meanwhile, Turkish Airline management has promised to deliver to Dnipro before Tuesday the Nigeria team’s kit bags and luggage of six players that failed to arrive with the team from Istanbul on Saturday.

Team Administrator, Dayo Enebi Achor, told thenff.com: “Our kit bags did not arrive with us from Istanbul. The bags of six players also did not arrive, but we have alerted Turkish Airline and they have promised to deliver them to us in Dnipro between Sunday and Monday.”

PHOTO: Officials of the Embassy of Nigeria in Ukraine, led by the Charge d’Affaires, Mr. Martin Adamu, were at the airport in Dnipro on Saturday evening to receive Coach Rohr and some Eagles’ officials.