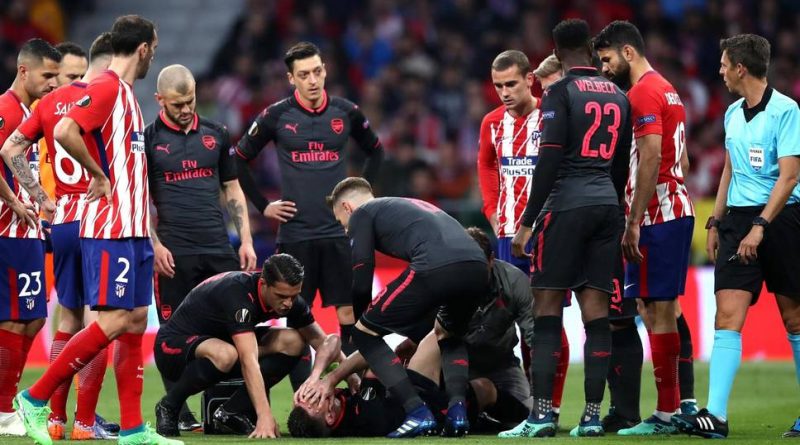 INJURY and heartbreak. That’s how it ends. Not the ending Arsene Wenger wished for and arguably not the one he deserves.

“I want to finish this love story well,” had said Wenger on the eve of the game, a rare moment of sentimentality from the 68-year-old who has always been so focused on The Job.

Nevertheless, defeat to Diego Costa’s solitary goal means Sunday’s planned send off at the Emirates after the game against Burnley is in danger of feeling an empty one, The Evening Standard reports.

In an end of an era retrospective, there will be talk of the invincible year, those two Doubles, a host of FA Cup successes.

However, it is still a sad old cliché, an irreconcilable couple flicking through their old records together.

One of those memories, Wenger’s greatest European night, was just across the city when his patched up team beat Real Madrid’s Galacticos. And though Arsenal tried valiantly until the end, it was clear from last night’s return to a city even with so many memories, that the magic

Emotions were fraught enough on another European night this week that showcased fans at their finest.

But just seven minutes had gone in the noisy cauldron of the Wanda Metropolitan stadium – venue for next year’s Champions League final – when Arsenal’s collective nerve was tested even more.

Away from the ball, nobody saw Laurent Koscielny collapse initially, save for Costa who was nearest. But the agonised thumping of the Arsenal skipper on the lush green turf soon drew attention as his intense pain radiated around the now-subdued stadium.

Gingerly he was lifted onto a stretcher with tears pouring from his eyes, his troublesome Achilles picking the worst possible moment to let him down completely.

Generously the whole stadium applauded his procession from the pitch but now Arsenal were going to have to attempt the near impossible without their leader and the highly questionable rear guard of Shkodran Mustafi and now Calum Chambers.

Jack Wilshere snatched the luminous Arsenal armband but this was a difficult opening for the Premier League side.

In the tunnel before the game, Arsene Wenger had promised his side would be on the front foot.

“We have to take the game to them,” he said. “They will try to get us on the break. The only way to score is to play with the handbrake off.” But even before the injury, former Chelsea striker Costa had continued his bullying of Arsenal by knocking both Koscielny and Nacho Monreal off the ball before firing into the side netting.

Arsenal were struggling to get a hold of the ball.

At the other end, with the orange-clad David Ospina careering around his area with the ill-channelled energy of the Tango-man, the handbrake-less Arsenal looked like an accident waiting to happen.

Thomas stung Ospina’s hands with a drive from the edge of the area just after the half-hour and the ever-dangerous Antoine Griezmann threaded a clever shot inches past the far post as Arsenal struggled to cope with an Atletico free-kick.

Wilshere went into the book for taking retribution for a filthy foul on Alex Lacazette against Gabi but it was a different kind of leadership Arsenal were looking for.

But with the sanctity of the half-time almost in sight, that flimsy defence was finally ripped apart.

A long clearance from goalkeeper Jan Oblak was headed weakly away by Chambers, a quick diagonal pass caught Hector Bellerin the wrong side of Costa and if nothing else, the Spain international striker is strong enough to hold off a challenge and whack the ball into the back of the net.

Arsenal had chances in the second half. A Wilshere shot caught Aaron Ramsey on the thigh but he could not quite keep it close enough to get in a shot from point-blank range.

Arsenal tried hard, whether for themselves or their manager will never be known.

They simply lacked the class they needed to take their destiny into their own hands.