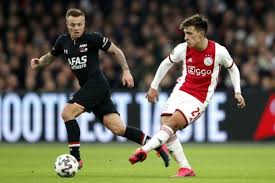 The Dutch FA has announced that no top-flight league football title will be awarded this season after the Covid-19 pandemic brought the campaign to a premature close. KNVB said this after a meeting with clubs and unions representing coaches and players on Friday.

However, Ajax Amsterdam and AZ Alkmaar, who were level on points at the top of the standings with nine rounds of matches still to play, will go into next season’s Champions League.

The campaign was declared over Tuesday when the Dutch government extended a ban on public events to September 1 in an effort to curtail the spread of the new coronavirus, which has caused more than 4,000 deaths in the Netherlands.

Ajax were top of the Eredivisie table with 56 points from 25 games, only ahead of AZ on goal difference, and both teams will now fill the Netherlands’ qualifying places in UEFA’s 2020-21 Champions League, Europe’s elite club competition.

“In these times, under these circumstances it is not appropriate to speak of a championship, therefore we only confirm the placing of the clubs as per the last standings,” the KNVB said in a statement.

On the basis of top place, Ajax will take the Netherlands’ automatic place in the Champions League group phase while AZ will enter the competition at the preliminary round stage.

AZ, this season’s surprise package, were last in the elite competition in 2009-10 when they reached the group stage.

Third-placed Feyenoord Rotterdam will compete in Europa League group phase, while PSV Eindhoven, who are fourth, and Willem II Tilburg in fifth will be in the preliminary rounds.

It was also decided there would be no relegation and promotion after a vote of the 38 first and second division clubs.

“It will be crystal clear to everyone involved, from supporters and players to directors and referees, that public health always comes first.

“Today’s decisions made about the settlement of the competition were for a mere football problem in the perspective of what the corona virus has caused to society.

“Nevertheless, the KNVB is aware that today’s decisions will cause great disappointment in football for some,” the FA said.