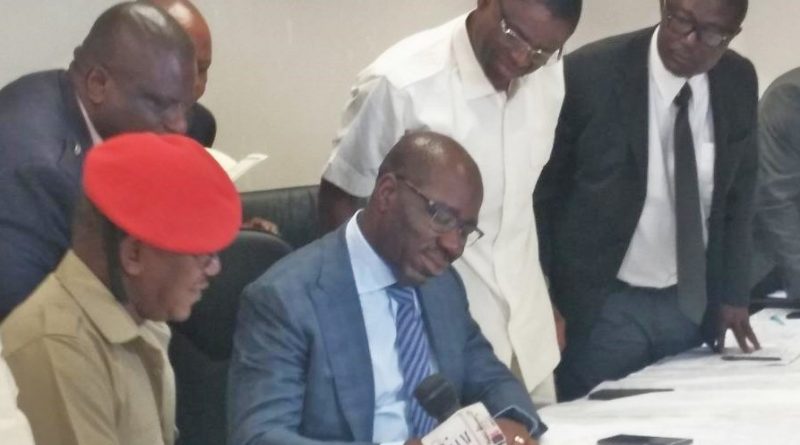 Nigeria’s Minister of Sports and Youth Development, Solomon Dalung on Monday praised facilities being put in place by the Edo State Government for the hosting of the 20th edition of the National Sports Festival in Benin City in 2020. He said they are comparable to facilities used in hosting international sporting competitions.

Dalung spoke at the signing of a Memorandum of Understanding (MOU) on the 20th edition of the Sports Festival at the Media Centre of the National Stadium in Abuja.

An MoU is usually signed between the Ministry of Sports and the state to which the right of hosting the Sports Festival has been granted. The document spells out the duties and obligations of both the Sports Ministry and the hosting state. It also touches on the composition of the Main and Local Organising Committee of the Games.

The Sports Minister who was in Benin City two weeks ago to assess the level of work on facilities for the Games.

He said, “I am elated that at the closing ceremony of the 19th NSF, we were able to secure a Host State for the 20th edition of the Games. This ceremony is therefore very significant as it not only confirms but also reassures Nigerians that the host for the next National Sports Festival is ready and willing to undertake the responsibilities associated with hosting a festival of this magnitude.

“I am further encouraged with the venues and facilities I saw in Edo State during my recent visit to the state. As I stated during the brief interaction I had with members of the Press immediately after the inspection, Edo State has enough facilities to host the Festival with what is currently on ground.

The Minister told the Edo State Government that in order to successfully host the 2020 Sports Festival a number of things needed to be put in place.

He outlined them: “As contained in my letter of invitation to bid for the hosting rights to successfully host the National Sports Festival, Edo State is required to among other things, put in place a Local Organizing Committee and sub committees as it deems fit.

“Provide befitting board and lodge for members of the MOC, Games Services Sub-Committee and the MOC Secretariat for the duration of the festival, ensure the security of lives and property of all dignitaries, athletes, officials, spectators, guests, etc throughout the period of the festival.

“They are to also ensure the physical availability of the approved facilities for all the sports on the official Programme and provide accommodation for accredited athletes and officials including facilities for central feeding.”

Dalung assured that he was optimistic that Edo would provide and even surpass the requirements and advised the state to embark on aggressive sensitization and publicity needed in this regard.

In his remark, Governor Godwin Obaseki expressed his profound gratitude to the federal government on behalf of the people of Edo State for the confidence reposed in the state to host the 20th National Sports Festival in 2020.

“We will not take this lightly. Being a state with history in sports, we clearly understand the implications and full ramifications of the hosting right.

“We, as Bendel State were an integral part of the idea of formulating the National Sports Festival after the civil war, so we are very cognizant of the goals and purpose of the sports festival which is to build unity and patriotism, particularly, amongst young people in Nigeria, to develop their sporting talents and also for this Festival to serve as a hunting ground or recruitment base for talents at the grassroots level.”

Obaseki stated that Edo had commenced work with a total revamp and refurbishment of the Samuel Ogbemudia Stadium.

“The Samuel Ogbemudia Stadium has been covered. We have replaced the tartan tracks and the football pitch is being renewed, so we are prepared as a state to host this festival.

“We realize that as the first state host after the re-establishment of the games, we need to set a new standard.”

Obaseki named the Deputy Governor, Rt. Hon. Phillip Shaibu as the Chairman, Local Organising Committee and suggested a meeting of the National Council for Sports for February 21, 2019 for ratification and commencement of work in earnest.

The 20th National Sports Festival is being proposed to hold in March 2020.