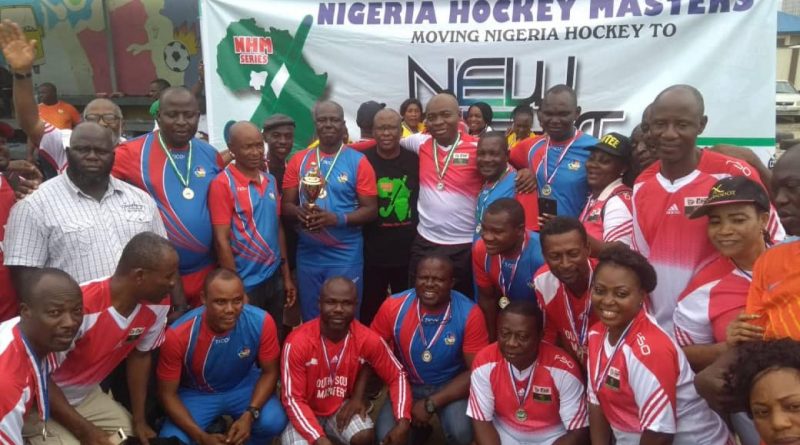 The Delta State Masters led by Nigeria Hockey Masters captain and legendary hockey player, Felix Gheghor, were exceptional in all the games they played surprising exhibiting the skills and zest that made them a force to reckon with in the glory days of Nigerian hockey.

The Delta Masters paraded great Nigeria hockey legends like Peter Itawansa, Sunday Ogodogu, Samson Abrakassa, Aliyu Shauibu  and Lucky Adamson among others, were purposeful in all the games they played. They brushed aside challenges from the Omi Brown-led Port Harcourt Masters, the Folarin Jaiyeola-led South West Masters and South-South Masters motivated by ex-international and the National Coordinator of the Nigerian Hockey Masters, Barrister Walter Imoedemhe.

The South West Masters were supported by two non-playing hockey greats; Jamiu Aminu and Ayo Ladeinde, who gave the team all the needed boost to forge ahead.

The most interesting game in the Men’s category was the match between South West Masters and the South South Masters. It was a very impressive game that had the trappings of vintage Nigeria hockey top flight games when the masters were at the prime of their career.

In the women’s category, visiting Plateau Women’s Masters won the title after beating South West Women Ladies in a two legged fixtures. The Plateau Ladies were too tough to crack by the South West Ladies led by ex-international Ileladewa Aloba, who re-enacted her excellent stick work, but the defensive brick wall set by the Plateau Ladies was just too solid to crack.

This was followed by a fanfare victory ceremonies where the champions Delta Hockey Masters were presented with gold medals and a gold trophy for their efforts in the men’s category. The second and third placed teams were presented with silver and bronze medals respectively.

In the women’s class the two teams Plateau Ladies and South West Ladies were presented with gold and silver medals respectively.

The Nigeria Hockey Masters Series 3 competition was preceded by NHM General Congress which held at the Manason Hotel, Adebola Street, off Adeniran Ogunsanya.