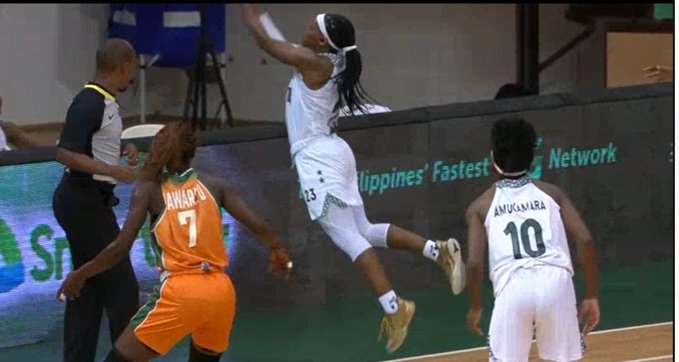 Nigeria coach Otis Hughley Jr took a swipe at officiating in the ongoing Afrobasket for Women holding in Yaoundé, Cameroon. Hughley spoke moments after D’Tigress defeated Cote d’Ivoire 72-56 to book a place in the semi-finals.

The coach of the back-to-back African champions said players who are used to quality officiating in other leagues across the world could be discouraged from participating in African competitions.

He said, “We want to see a foul called out as foul; let’s take politics out of this event. If we keep condoning rough play, then we will chase good players away; players who are used to quality officiating would stay away. Bad refereeing will chase people like this (pointing to Ezinne Kalu) away from African events.”

In the match played on Thursday at the Palais Polyvalert des Sports, D’Tigress showed their desire to take the African trophy back home with a 14-0 run after the tip off. Coach Igor Kovasevic of Cote d’Ivoire called a Time Out to slow down Nigeria’s rhythm but it hardly had any effect on what was going on. The first quarter ended at 24-8. Respite did not come the way of the Ivorians as the Nigerian ladies expanded the lead to 43-21 at the break. D’Tigress maintained the lead at 59-35.

The Ivorians had a better fourth quarter but at that point the Nigerians were already planning for their next game against Senegal.

“Yes, at that point we had to play softly and take some rest and of course avoid further hard knocks,” Hughley told reporters.

Amy Okonkwo hit 14 points and Ezinne made 17 points as the Nigerians swept through to await a huge showdown with the Senegalese on Friday. The Senegalese defeated Mozambique 74-46 in the second quarter final game of the day. D’Tigers had not known their opponents when Hughley spoke but he said whichever team they eventually face would not matter.

“Senegal or Mozambique and we get set. Even it turns out to be Mozambique it is also going to be tough because they quite a physical team.”

Nigeria and Senegal will continue from where they stopped in 2019, when D’Tigeress defeated the Lionesses in Dakar to win the African cup in a row in spite of the full house backing of the Senegalese fans that showed up in their thousands to celebrate their team and the sports arena the court just built. This match has been dubbed here the final before the final game.