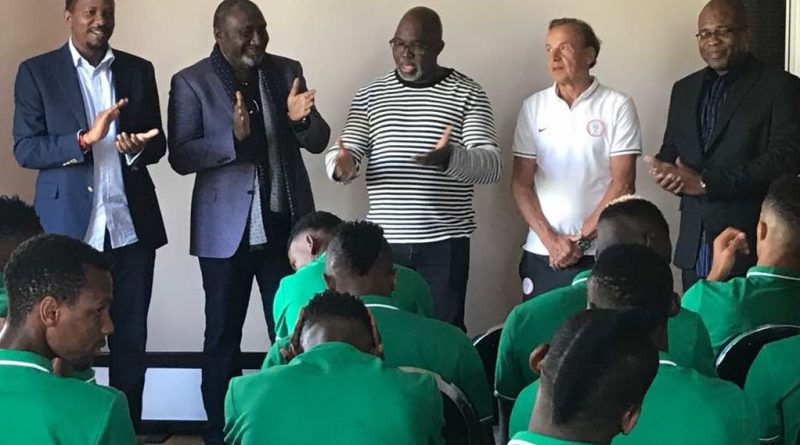 It took three goals in under half an hour, including a brace by Leicester’s Ahmed Musa, to steer the Super Eagles past the Hawks of Togo in a friendly in Paris on Thursday.

Musa slotted past goalkeeper Fatao Alhassani as early as the third minute, finishing off a superb job by Alex Iwobi. Iwobi also provided the assist for the second goal by Musa 15 minutes later. The Nigerians dominated heavily against their fellow West Africans, who featured at the Africa Cup of Nations in Gabon earlier in the year.

The Eagles soared on a day that Nigeria Football Federation President Amaju Pinnick; second Vice President Shehu Dikko and Aiteo Group chieftains Francis Peters and Andrew Onyearu had gingered the players and technical crew with assurances that money would no longer be a problem. The assurance follows the 5-Year partnership agreement between the NFF and the energy solutions company in April.

Oghenekaro Etebo got the better of goalkeeper Alhassani in the 27th minute and laid for Kelechi Iheanacho to tap into the net for Nigeria’s third.

Victory means the three-time African champions remain unbeaten in all their eight matches over the past one year, winning six of those and scoring 15 goals while conceding only five.

The triumph also came on a day that Nigeria moved two steps up in the monthly FIFA rankings to 38th and 4th in Africa. English Premier League club West Ham’s target Iheanacho has now scored seven goals in 10 matches for the Eagles, including scoring in seven of the last eight matches.