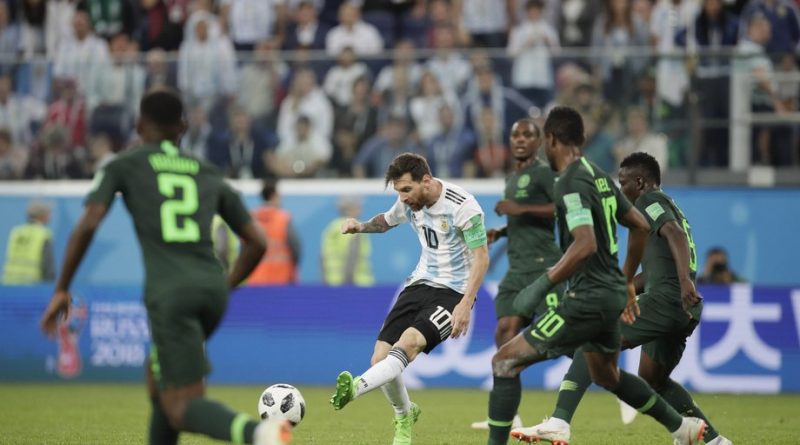 Argentina edged Nigeria 2-1 on Tuesday in a game played in Saint Petersburg to sneak into the Round of 16 of the 2018 World Cup and condemn the Super Eagles to an early exit.

The Zenit Arena in northern Russia, and the sea of white and blue did not have to wait too long for their cheers to thicken as Lionel Messi shot past Francis Uzoho with his weaker right foot, when the Nigeria defence was breached in the 14th minute.

That was only a minute after Kelechi Iheanacho waited for too long on a brilliant opportunity, and subsequently made nothing of it.

In the 34th minute, Uzoho stretched full length to tip a Messi free kick from 22 yards onto the upright, and there were to be no more opportunities in the first period.

Nigeria started the second like a house on fire, and from a corner kick, the strength of Nigeria told as Javier Mascherano held Leon Balogun, leaving Referee Cuneyt Cakir with no choice but to award Nigeria a penalty. Victor Moses sent Franco Armani the wrong way to draw Nigeria level.

The Eagles played a cautious but diligent game. Defending stoutly, marking hard and then launching counter –attacks, they could have wrapped up matters had Odion Ighalo not missed two opportunities to send Argentina home.

In the 59th minute, Ahmed Musa sprinted past the Argentine defence but his attempted pass was thwarted, but two minutes later William Ekong had to be alert to divert a pull-out as the Albiceleste flowed forward.

Wilfried Ndidi came close from a sweet team move in the 71st minute, slicing his shot a little too high, before Ighalo wasted a glorious opportunity when a diverted pull-out by Musa left him face-to-face with Armani.

Ighalo missed another sitter in the 83rd minute, with only Armani to beat, and a minute after, Oghenekaro Etebo side-netted from a 23-yard free kick.

As the Eagles poured forward in search of a winner, Marcos Rojo, who had scored the winner against Nigeria in a similar World Cup group phase match against Nigeria in Porto Alegre four years ago, exploited the gap in the defence, firing beyond Uzoho from a Mercado pull out.

The result meant Argentina finished with four points, one ahead of Nigeria, to take the second ticket from Group D into the knockout rounds, while Croatia (2-1 winners over Iceland) finished in first place with the maximum nine points.

Argentina will play France in Kazan on Saturday while Croatia test strength with Denmark in Nizhny Novgorod on Sunday.