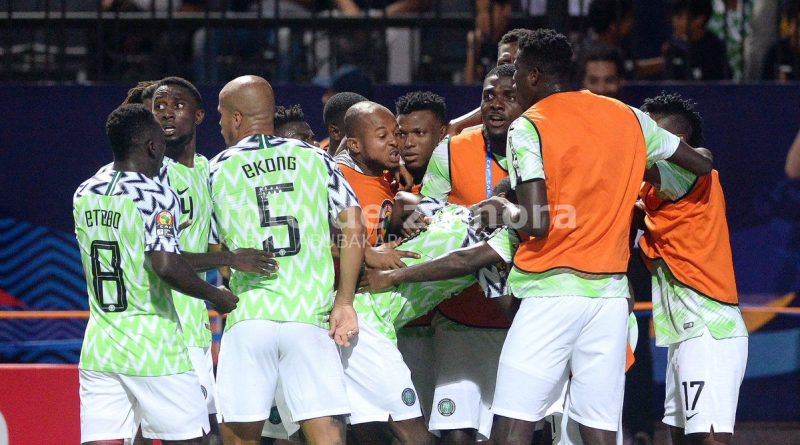 Conquerors of Cup holders Cameroon in the Round of 16 in a game played in Alexandria on Saturday; the Super Eagles have taken abode at the posh Meridien Heliopolis in one of the largest cities on the African continent.

On Sunday, following the decimation of the Indomitable Lions, the Eagles had a recovery training and then generally retired to their Helnan Palestine Hotel in Alexandria to relax for the day.

Coach Gernot Rohr has said his charges are very much looking forward to Wednesday night’s clash, which brings together once more two teams who were involved in the same group in the qualifying campaign.

First encounter was at the Godswill Akpabio Stadium, Uyo on 10th June 2017, with the Bafana Bafana inflicting a painful 2-0 defeat on a half-strength Nigeria side. In the return in Johannesburg on 17th November 2018, the Eagles dominated and were denied two apparent goals by the referee in a 1-1 draw, which ultimately earned them a berth in the AFCON 2019 with a match to spare.

Rohr is not one to forget sharp pains inflicted by lower-ranked teams, and the fury of what happened in Uyo on 10th June 2017 – his first loss as Eagles’ manager in a competitive match – could be deduced in the way he spoke on arrival in Cairo, though he insisted that Nigeria is not thinking of revenge but simply a place in the semi finals.

“We are here to win. It is not going to be an easy match, but surely if you have to win the Africa Cup, you will not expect to be faced with easy matches at this stage. We know ourselves from the qualifying campaign and it will be no holds –barred on Wednesday. It is not a matter of revenge; it is about reaching the semi finals.”

Nigeria’s army includes three members of the squad that won the Africa Cup of Nations in South Africa in 2013, namely defender Kenneth Omeruo, midfielder and skipper Mikel John Obi and forward and deputy skipper Ahmed Musa. They trained at the Shams Club on Monday evening.

There is also forward Odion Jude Ighalo, who topped the scorers’ chart in the AFCON 2019 qualifying race with seven goals and is joint top scorer in the ongoing finals with three goals, alongside Senegalese Sadio Mane. Indeed, Ighalo’s man-of-the-match performance was the tonic the Eagles needed to overcome the Cup holders on Saturday.

There is also goalkeeper Daniel Akpeyi, who turns out for South African Premier Soccer League side Kaizer Chiefs. He has not had many opportunities with the senior team but is number one at the ongoing finals.

After winning their second AFCON title in Tunisia in 1994, Nigeria failed to turn up to defend their title in South Africa two years later, stopped on the orders of military dictator Sani Abacha. South Africa won the championship, but Nigeria insisted the Bafana Bafana were no authentic champions having not faced the firepower of the Super Eagles.

Barred from the 1998 finals as a result of their boycott of the 1996 competition, Nigeria returned in 2000 as co-host, and in the semi finals, Tijani Babangida scooped two quick goals to douse tension and condemned the Bafana to the third place match as the Eagles marched into the Final.

Four years later, in Tunisia, it was an incensed Eagles that confronted Bafana in their second match of the group phase, as Morocco had stolen Nigeria’s thunder in their first game. The result was a 4-0 spanking, including a brace by Osaze Odemwingie.

When Nigeria won its third African title in South Africa six years ago, the paths of both teams did not cross.

However, it is a new day and a different stage at the Cairo International on Wednesday night, as Bafana have quiet confidence and steel from their stunning elimination of host nation and seven –time AFCON champions Egypt on Saturday night.

“It is a big match, no doubt. But we know what we have to do and we will do just that. Beating the defending champions has given us the confidence that we can all the way here,” said skipper Mikel Obi, who has announced that this would be his last AFCON expedition.

Indeed, Saturday’s feat was the sixth time in history that Nigeria would be ejecting the Cup holders from the Africa Cup of Nations, and each time they did, they had gone ahead to finish on the podium – either as champions, runners –up or bronze medal winners.

In 1976 when they beat Cup holders Zaire (now DR Congo) in Ethiopia, Nigeria won bronze. In 1984, after beating Ghana in Cote d’Ivoire, they finished with the silver medals, and in 1994, they emerged champions after eliminating Cote d’Ivoire in the semi finals in Tunisia.