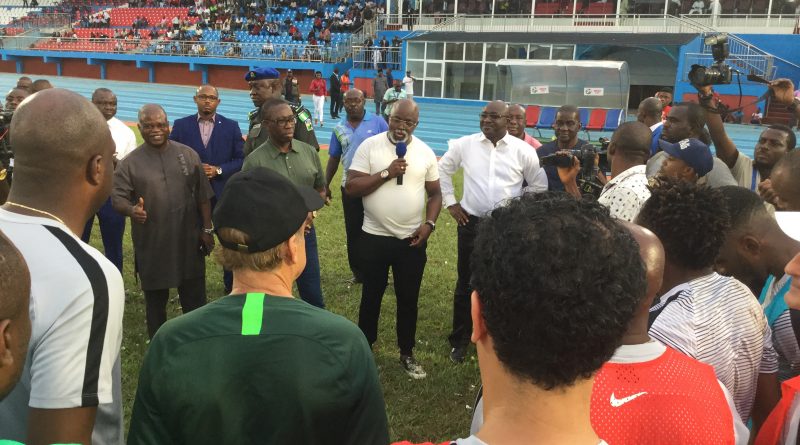 Super Eagles have praised Delta State Governor Ifeanyi Okowa for his incentive of $25,000 for every goal in Saturday’s 2019 Africa Cup of Nations qualifying cracker against South Africa, admitting the incentive will motivate the team to fire from every cylinder.

While visiting the team at its evening training session on Tuesday, in company with President of the Nigeria Football Federation, Amaju Melvin Pinnick, Okowa pledged $25,000 for every goal scored by the three-time African champions in Johannesburg.

With the Eagles having lost their first-ever competitive match against the Bafana Bafana on Matchday 1 of the series in Uyo 17 months ago, and with the added pull of qualifying for the 2019 Africa Cup of Nations with a match to spare, Okowa’s cash pledge came in ample time to stoke the fire in the Nigerian boys further.

Okowa said: “I am pleased to have the Super Eagles here in Asaba. We hope you make Asaba your home, and as a people we will begin to follow your progress even more closely. We appreciate the giant strides Nigerian Football is making and commend the leadership of the NFF for making Delta State part of its success story. For every goal scored by the Super Eagles in Johannesburg on Saturday, we pledge a reward of $25,000. Please don’t put a limit to the number of goals you score on Saturday; try and score as many as possible.”

Stand-in Captain Ahmed Musa responded: “We thank His Excellency, Governor Okowa, so much for the motivation to us to do well in Johannesburg on Saturday. We promise that we will return here on Sunday with victory. We will also do all we can to give the people of Asaba and the generality of Delta State and Nigerians a very good game against Uganda next Tuesday.”

NFF President Amaju Pinnick said: “We appreciate Governor Okowa for the tremendous support given to the Super Eagles and by extension, the Nigeria Football Federation. The bill for next Tuesday’s international friendly against Uganda has been underwritten completely by the Delta State Government. As my Governor and father said, this State will begin to play a more prominent role in the programmes of the NFF and the Super Eagles. I want to commend the Super Eagles Technical Adviser, Gernot Rohr for assembling a young, professional and very efficient team for now and the future. We will continue to do all we can to making sure they do Nigeria proud.”

Coach Gernot Rohr said: “I thank the Delta State Government for their hospitality and for making us feel so comfortable. I am so happy because the pitch is in a much better state than the last time I was here. The Super Eagles will continue to work hard to make all those who have played one role or the other in its progress happy that their investment in the team is not a waste.”