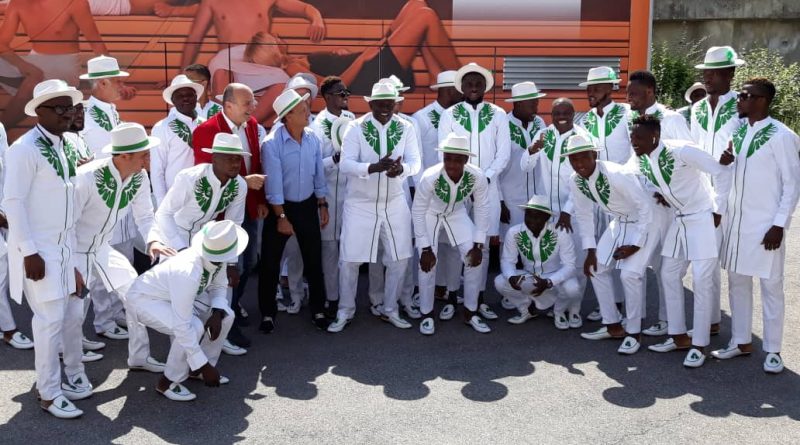 The Super Eagles are really making statements at the World Cup even before they take the first shot at goal. They practically brought the world to standstill, particularly Londoners, on the day they launched out their Nike home and away World Cup jerseys. It took just matter of hours for the entire stock to be sold out. It had never happened in the history Nigeria’s participation at the World Cup beginning with the first outing at the USA ‘94.

On Monday, Eagles again caught the attention of the football world with their unique travel outfit to Russia.

The jersey frenzy continued with the traditional outfit going by the glitz that marked their arrival in Russia from their training camp in Austria. They touched down in Russia in exotic, white kneel length caftan-like designer dress with a white hat to match. The designers of their outfits also kept faith with football by placing patches of football on the collars of the white and green outfits. It was indeed a mix of the Nigerian culture and world of football.

And just like it happened in London at the sale of the jerseys, the social media went agog as soon as their pictures from Austria and arrival in Russia hit the networks.

One fan wrote on Twitter, “Love the fact you guys aren’t going in suit. We are Africans. We dress like one to Russia. Goodluck.”

“First it was the announcement of their tournament kits that sent football supporters crazy. Now it is their travel attire that has got everybody talking,” The Daily Mail wrote.

“They nailed it with their kits, and have delivered the goods yet again as they boarded their plane to Russia wearing traditional Nigerian clothes, Buba and Sokoto’s

“From head to toe, the Nigerian squad have indulged in their culture and clearly have no intentions of blending in with the crowd other nations looking to upset the odds in Russia.

“While sticking to tradition, however, designers of their outfits have also kept faith with the football them by placing footballs on the collars of the white and green outfits.”

And the Nigerian players were not left out in the write ups.

“Tell the world we are coming #positivevibesonly #worldcupvibes #eue3 #supereagles @ighalojude @ogu30” Nigeria defender Elderson Echiejile wrote on Twitter as they made their way to their Essentuki training base in Southern Russia.

“Nigeria once again won the fashion stakes at this year’s World Cup with their incredible travel outfit,” they wrote.

“Captain John Obi Mikel led his side to Russia in the head-turning green and white attire that featured footballs below the collars.

“This formal look has sent everyone into frenzy all over again, with the immaculate design being complemented by matching shoes and hats.”

The Sun then compiled some social media reactions on the outfit.

“Nigeria should be advanced to the World Cup final for these team travel outfits alone,” one social media user wrote.

Another wrote: “Why the hell are Nigeria’s everything so ‘yes’? First their kits, now these outfits!”

Another said, “If the Russia World Cup was all about fashion, Nigeria would lift the trophy before even kicking a ball.”

But it is not only the native attires that the world will see in Russia, the Nigeria Football Federation (NFF) under the leadership of Amaju Pinnick, also designed trendy suits for the Eagles.

Nigerian designer, David Bowler, was contracted to kit the players. The same designer prepared the suits Eagles wore to the 2014 World Cup in Brazil.

Coach Gernot Rohr and his wards have put behind them the dress and make up trophy as they had a light workout on arrival in Yessentuki, a city in Stavropol Krai, Russia. They know very well that football fans from across the world will be eager to see how they translated their lovely dresses to wonderful football on the pitch.

The Eagles will kick off their World Cup campaign against Croatia in Kaliningrad on Saturday, June 16.