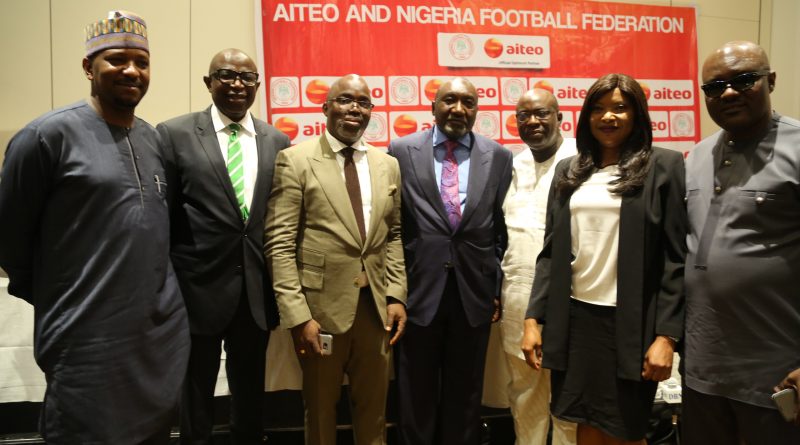 EFCC reportedly commenced corruption investigation against them as stated by the Special Adviser, Media to the Sports Minister, Nneka Ikem Anibeze, on July 6, 2018.

The leadership denied all the allegations contained in the petition authored by Mr. James Peters, a football coach, which the NFF officials have tagged baseless.

The Chairman, Media Committee of the NFF, Suleiman Yahaya Kwande, said in a signed press statement Tuesday that, it is on record that the NFF under the leadership of Pinnick has been the most successful in Nigeria to date in terms accountability and probity.

He wrote, “Till date, the leadership of the NFF has not been invited by any anti-corruption or indeed, any agency of government to explain the allegations contained in the said petition or even called upon to give an account of its stewardship.

“The NFF wishes to assure the public that, if eventually it is called upon, the leadership would cooperate fully with any agency concerned and give a robust explanation of its financial activities, as the NFF under Amaju Pinnick has entrenched transparency and international best practices as its mantra and has therefore not contravened laws of the land.”

Kwande, noted that, the Financial Derivatives Ltd (FDC) which he said was wrongly labelled by James Peters as “the conduit which the NFF embezzles money” is one of the major and most credible financial services companies in Nigeria with records of high reputations and integrity. He said FDC was not appointed as NFF Financial Advisers by Pinnick as alleged by the Petitioner but by the NFF Congress, the supreme legislative body of the NFF, pursuant to the provisions of the NFF Statutes, at its 70th Annual General Meeting held in Lagos on November 23rd, 2014.

“In addition to the FDC, two other companies were also appointed at the 70th AGM on November 23rd 2014- they are Pricewater House Coopers (PWC) as External Auditors and Bain and Co, as Management Consultants. These appointments were made on the recommendations of the Executive Committee and with the sole objective to bring in the world class professionalism, transparency, integrity and international best practices especially in financial management of the NFF. FDC has been working for the NFF since 2014 with due audited accounts prepared annually as required by Law, thus one wonders how FDC has suddenly become an issue of petition in 2018.”

He then added: “It must be put on record that funds from sponsors are not NFF revenues to be paid to revenue accounts but operational funds provided by sponsors for specific purposes such as payments for coaches, competitions, events and other developmental programmes as agreed with the sponsors in each case. The sponsors are fully in control and fully aware of how and when their funds are being applied and for what purpose.

“In addition to the above process, the NFF leadership ensured that at any time it received funds from sponsors, FIFA or CAF, an information Memo is duly sent to the Hon. Minister of Sports to notify the Government of the receipts of the funds, where the funds is domiciled (TSA or Remittal or FDC) and how it is going to be applied, including payment due to any marketing agency. Indeed the Minister has praised and or defended the NFF several times before the Federal Executive Council (FEC) for this show of transparency as it’s the first regime of the NFF to duly notify Government of all its sources of funding, receipts and application. There are several representations to the Government (Ministry of Finance and Accountant-General’s Office) by NFF, duly supported by the Hon. Minister of Sports, and National Assembly to completely exempt the NFF from the TSA. It is in recognition of this demand, that even the NFF Bill already passed by the two chambers of the National Assembly and awaiting transmittal to the President/Commander-In-Chief for assent, duly made provisions to exempt the NFF from TSA. In any case, NFF still uses the TSA for its Government subventions and funds from donor agencies like FIFA and CAF even though both FIFA and CAF, arising from the 2016 FIFA process review programme have written to demand separate account be opened for their funds in commercial banks so they can audit and track their funds early.”

“The NFF has four marketing agencies: Mediterranean Sports, Pamodzi, Hotsports and USP. The agents are paid agreed 20 percent fees after providing value added services to the NFF,” Kwande said, adding that: “On the issue of paying 40 percent commission to any agency as alluded in the said petition and put out in the Media release, this is totally untrue and deliberately put out to make the fictitious claims by the Petitioner look real.

“We are glad and delighted that despite the glaring malevolent intention of the Petitioner, Coach James Peters, he could not find any reason to accuse the NFF of taking any funds (either Government or from Sponsors) but rather his petition bothers simply on issues of process and procedures, which he has no competence, capacity or experience to understand by his training as a coach with no management background.”